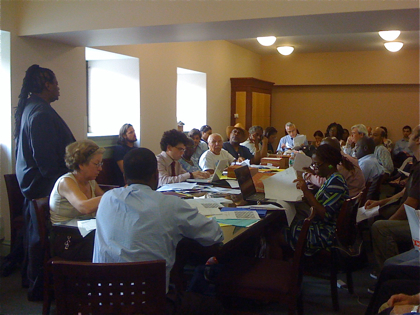 We’re reporting live from the Community Board 2 meeting tonight, and so far the executive committee has unanimously approved a liquor license for the potential Tea Lounge at 41 Clark St. and new facade designs within the Heights Historical District for the new Armando’s and a new Japanese restaurant at 78 Clark Street, in the former Sea Asian spot.

Here’s more news from last night’s CB2 meeting, in which the executive committee met in lieu of a full board monthly meeting since it’s summer:

About the Tea Lounge approved liquor license: owner Jonathan Spiel assured CB2 that the café was primarily a tea and coffee spot, with muffins and sandwiches and the like. But, in order to spike tea or coffee with Bailey’s or kahlua, he needs a liquor license. “The main source of our business is the café,” he said.

As for the new Japanese restaurant at 78 Clark St., owner Aaron Liu told BHB he hopes to open Moritomo Japanese Cuisine “as soon as possible,” probably by September. He and his architect went before the Board with an application to change the facade by removing the brick columns and restoring the original stucco.

Maria Byros, who will manage the new Armando’s at 143 Montague St., also wants to change the restaurant’s facade by bringing in new windows that won’t have as many panes looking out, yet will have the same shade of painted wood.

The Board unanimously approved both Landmark applications, and Byros’s architect said this application was not related to the famous lobster sign.