This is Brooklyn and he lives in the Heights 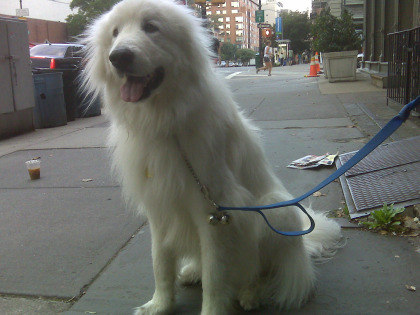 On Atlantic Avenue.  He’s a big dog Great Pyrenees, weighing in at 92 pounds and not even two years old.  But don’t let that fool you— recently, upset because he’d been left at home alone, he leapt over a fish tank, jumped out of his 2nd story window and landed splat on the sidewalk.  Subsequent trips to the vet— found him A-OK.  Not surprising as his ancestors were once guard dogs for French nobility, avalanche rescue dogs and even sled dogs.  These days, however, Brooklyn contents himself with parading up and down the avenue.  Say hello to him if you see him, but don’t mention the fish. (p.s. the owner got window guards, so don’t get all ASPCA on me.)