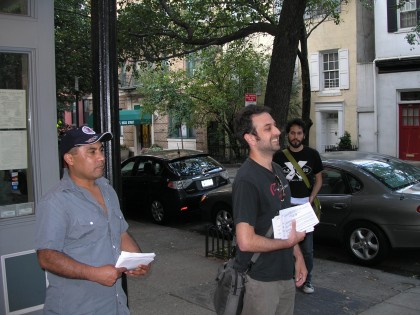 Update: The protesters returned AGAIN tonight at 6:20pm
The Brandworkers International protesters were back out at Jack the Horse yesterday evening, handing out literature about the ongoing workers’ rights litigation at the Tavern’s fish supplier, Wild Edibles.

Jack the Horse chef/owner Tim Oltmans tells BHB that the group seemed “more hostile” this time, when they arrived at 6:45 on Thursday evening. One protestor, a fired worker from Wild Edibles, allegedly did not move away from the restaurant’s front door, and supporters were “a little more in people’s faces” with their literature, he said.

We caught up with the union’s executive director, Daniel Gross, today, who said he and the cause’s supporters have no plans to back down, despite Wild Edibles’ claims that a settlement is imminent.

“Negotiations have been going on on and off for now almost two years,” Gross said. “The workers are unable to just rely on the other side, they need to speak directly to folks who are consuming the products.”

But is their message getting through to the customers?

Oltmans said diners told him they were unclear as to what the actual issues were from talking with the protesters and reading the  literature.

“None of my guests seemed to be negatively affected by what was going on and, in fact, several of them stated, ‘I’m ordering fish!,’”
Oltmans said.

We asked him if he has reconsidered where he buys his fish, following this brouhaha. He said:

“I’ve spoken to [Wild Edibles] quite extensively about what’s happened, and they were doing a couple of things that weren’t quite  right and they’re paying overtime back pay and that seems like a good, safe thing for them to do, if they were not paying overtime when they should have been. … So, from my perspective [and] from what [Wild Edibles] has told me and shown me, it appears that they’ve made a good faith effort to resolve the issues and that’s why I don’t understand why [the protests] are ongoing.

“I’ve worked with Wild Edibles for many, many years and I feel some loyalty towards them and want to give them the benefit of the doubt. I know them, and these other guys, I don’t know who they are.”

So, why are they targeting Jack the Horse? Gross said it’s simply one of many restaurants citywide where they are alerting customers to their cause.

And will there be more protests, or something more drastic? Gross said no, not in the immediate future: “We’re not calling for a boycott of Jack the Horse Tavern at this time. We’re asking people to avoid the seafood though if they go there.”