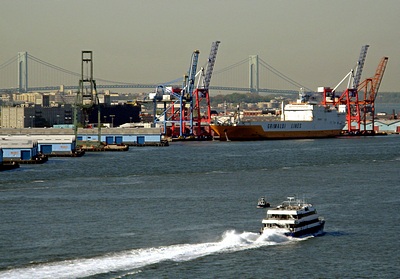 Commuting by water can be a pleasant, and, for many, convenient way to start or end the workday. Consider also the prospect of getting to or from LaGuardia or JFK by ferry (both would require a shuttle bus or van to get from ferry landing to terminal), or to Citi Field or Yankee Stadium, or to Coney Island to see our own Cyclones.

The City’s Economic Development Corporation and Department of Transportation are jointly conducting a study to determine what new ferry routes should be established. In connection with this, they are holding a town hall meeting at Kingsborough Community College, Room U 219/200, 2001 Oriental Boulevard, starting at 7:00 P.M. on Wednesday, July 22, to which Brooklyn residents are invited to present their ideas about new routes on which they would like to see service.

Among the locations identified as terminals for new service are the existing ferry landing at the foot of Old Fulton Street, and a proposed new landing near the foot of Atlantic Avenue. Locations to which service could be provided include, in addition to those mentioned above, various landings in downtown Manhattan as well as up and down the east and west sides, Roosevelt Island, Bay Ridge, Sheepshead Bay, Floyd Bennett Field, and the Rockaways.