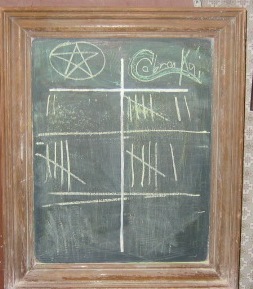 Brigate Bocce learned a few things today – one of which is that America is losing its sense of humor.

After beating the very affable Cleveland Steamers (wonderful citizens of the world btw) in the first round of playoff at FloydNY, the Brigates learned just what they've gained after a decade of therapy.

IT'S BOCCE IN A BAR, FRIENDS.

Kobra Kai, or at least some of their members have not gotten that memo yet. We feel their pain, but urge some of their team to seek some professional help ASAP. Or at the very least chill out to some old Richard Pryor records.

The Brigates put up a valiant fight — JDP from the Polling Unit, Dr. Mark and Mrs. Fink all kicked some arse, if you will.

But for those of you who may not get out very often, we need to reiterate — IT's BOCCE… IN A BAR.

Understand that Fink has been a big fan of "Ross Flats" blog and his adventures in checking out the bocce courts of NYC. A fine American is he, we say.

But really, did we expect such an immature competitive spirit? Nope. Especially from (perhaps) SOME GUY who wouldn't even hug Fink midway through the match. Fink likes his hugs.

But when Kobra Kai, who we understand have been in the FloydNY league for years, invoked "Rule 8" after a roll by Naked Idiot's Dan, the game of bocce at Floyd became complete "merda del toro". It made us a little teary, inside — where it counts.

But before YOU decide to take up arms and defend Brigate Bocce, let us say we welcome the day off next week to kick back and enjoy life here in the Greatest City in the World. And rest assured, the folks who run FloydNY didn't have this kind of "special" behavior in mind when they started their bocce league.

Kobra Kai, on the other hand, will be busy obsessing over Rule 8. Really…obsessing…over Rule 8.

See you on the clay next season. Brigate Bocce will continue to be gentle hippies and nothing more.