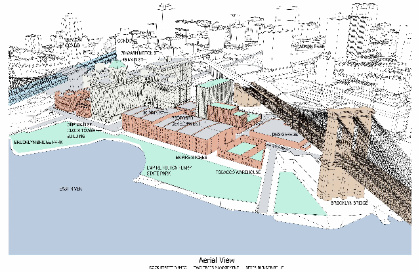 ((Click here for a downloadable PDF of the revised renderings.)) 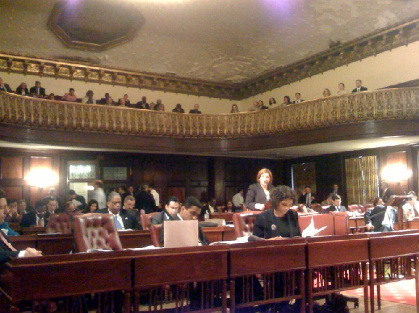 We’re live-blogging, sort of, the Dock Street DUMBO vote before City Council this afternoon. The full Council just voted 39-9 in support of the project, with the no-votes from Councilmembers Tony Avella, Charles Barron, Bill DeBlasio, Vincent Gentile, Eric Gioia, John Liu, Peter Vallone, and, of course, David Yassky. The vote itself was for the necessary rezoning that the developer, Two Trees Management, needs to build its 17-story residential tower in DUMBO.

More quotes from dissenting voters, comments, and reactions forthcoming, including transcripts from Council members for and against the project. (Update 5:17 pm: Those quotes are now at the bottom of this post!)

In the meantime, here are initial reactions from Walentas, Yassky, and the DUMBO Neighborhood Alliance:

“I”m disappointed that the City Council made a bad decision. I guess I hope — maybe it’s foolish, but I would still hope that the property owner sees the broader public interest in protecting the Brooklyn Bridge and doesn’t change the views as you walk over the bridge.”

And DUMBO Neighborhood Alliance President Gus Sheha, who strongly opposes the project, just sent out his lengthy statement, printed here in its entirety:

“Today, the 2009 New York City Council, signed the deed allowing the sale of one of the most identifiable national landmarks and one of the most striking man-made structures in the history of the Unites States of America, the Brooklyn Bridge.”

“Those who have fought hard to oppose the Dock Street development are disenchanted and disenfranchised by our elected officials, who after wide-spread opposition to this zoning change, which included 25,000+ signatures and postcards, 8 neighborhood organizations, the National Trust, the Municipal Art Society, the Historic Districts Council, Architecture Society of New York City, the Roebling Society – Chapter for Industrial Archeology, the American History Museum of the Smithsonian, Pulitzer Prize winner David McCullough, cinematographer Ken Burns, the Roebling Family and more, the “will of the people” was disregarded. Community and civic mobilization, always promoted by elected officials as a way for communities to be heard, was completely ignored.”

“It is clear that ‘the fix’ was indeed in long before the ULURP process began, an insult to all law abiding, tax paying, community promoting citizens of not only our city, but our country. The pay-to-play politics, conflicts of interest and special interests infiltrating our halls of local government are the reasons behind the public’s disinterest and apathy towards our politicians and government. Moreover, the apparent collusion and corruption with the developer of city agencies, sworn to protect the interests of the tax paying public, are nothing but favor dolling machines with very little public integrity.”

“Mr. McCullough, in describing the Brooklyn Bridge, has poetically stated, ‘None of us had a hand in building it. None of us contributed a thing to its architectural grandeur or its pioneering technology. None of us were injured in the effort, or suffered from the bends for our labors beneath the river, or died in accidents. They did all that, those men and women of that vanished time. And they built superbly. They set an example of how things can be done right.’ Today let it be told, the New York City Council did everything but set an example on how things can be done right. We’d like to commend council members Avella, Barron, DeBlasio, Gentile, Gerson, Gioia, Liu, Vallone and Yassky for taking a stand and showing the rest of council what doing the right thing is all about.”

“To our members, neighbors and admirers of the Brooklyn Bridge, far and wide, we assure you that our fight against Dock Street does not end here. As stewards of the Brooklyn Bridge, we are exploring various legal and governmental investigatory actions to counter the assault committed by Two Trees Management, aided and abetted by City Council, on our cultural heritage and history.”

Developer Jed Walentas, through his spokeswoman Barbara Wagner, fired off the following statement literally moments after the vote:

“We are grateful for today’s vote by the City Council approving Dock Street Dumbo and want to thank all the Council members for their careful deliberations and support. Two Trees is both honored and proud to be able to provide the community with a new middle school, affordable housing and a thoughtful, environmentally friendly green building that will add to the vibrant, historic waterfront neighborhood of DUMBO.”

Comments from Council members for and against the rezoning proposal and project itself, as transcribed before each member’s vote:

“The 80-20 formula to me is not affordable, to me development should pay more and do more with affordability. The debate was reduced to someone wanting a better view of the Brooklyn Bridge and affordable housing.”

“When I think about what’s at stake in this application is the Verizon Building on the New York side of the Brooklyn Bridge. Any of us who have walked over toward Manhattan know that the experience of the bridge is marred by the presence of a big ugly bldg that’s right in your view.

“I’m not saying the building proposed here will be as unattractive or as devastating as that building, but when you have one of the armful of treasures in the entire city that is the experience of walking over the Brooklyn Bridge, I think it would just be a mistake to tamper with it in any way and for that reason I am opposed to this.”

“I urge my colleagues to vote in support of the Dock Street project because it holds the promise of hundreds of new middle school seats in for children in Downtown Brooklyn, proposed to build 300 seat in a privately funded, “green” LEED-certified building that will also create DUMBO’s first very affordable housing. The developer plans to donate a significant portion of the cost of the city as well, worth over $40 million. Further, he has already reached out to surrounding community regarding job opportunities for women and minority businesses.

“The Dock Street project is exactly the kind of smart, innovative, carefully-crafted and planned partnership that the future of this city needs, particularly at this time of challenging fiscal needs.

“I’m also well aware of the concerns by some project opponents to proximity to the Bridge, so I took the time to walk the neighborhood. I concluded quite comfortably that Dock Street DUMBO does not pose any kind of threat to the Brooklyn Bridge, which is a position clearly shared by the local community board and city planning commission, along with numerous design professionals, and area parents and others throughout the neighborhood.”

“…The [land use] committee voted overwhelmingly in the majority to pass this project. The community board in this community voted overwhelmingly in favor of this project. And I just want to point out right now, in the worse recession that we have seen in decades, economic development and smart projects going forward are going to be the key for the future of this city.

“Moreover, the fact that we are building a school to educate the future of our city and that folks can go there from all over the community is an extremely important aspect of this project that cannot be underestimated, so the land use committee voted in favor if it. I urge my colleagues to vote in this project — it is the right thing to do for the future of this city.”

“I respect those who disagree with my position in opposition to this plan, but many of our neighborhoods desperately need more affordable housing and classroom space. But, as the proposed development for Dock Street currently stands, I’m not convinced it’s the best or more appropriate way and we must insure that no development project compromises the Brooklyn Bridge. For those reason I vote no.”

“I just want to say that the Brooklyn Bridge should never be compromised or overshadowed and there are other resolutions to the issues at hand.”

“A couple of days ago I had the opportunity to take a fieldtrip to Brookyn and to see this area that we’re talking about in the DUMBO area. I had not been to area since 1975 … and I was amazed and very pleased to see the development that had taken place there.

I was able to see that the magnificent bridge and the historical site that is there … and I had that opportunity to see what I was actually voting for and to see what could happen. I think that the bridge will maintain all of its integrities and historical aspects based upon what I saw and based upon what I could visualize, from not an architectural point but just visually. The school I think will provide a tremendous opportunity for a well-diverse population that could be there along with the affordable housing that could actually take place.

“It’s a beautiful place for people to be and I think that it would be something that would be very important to have — new housing and the diversity and the school there and I will be casting my vote in the affirmative.”

The project, as it stands following amendments from Borough President Marty Markowitz and the Department of City Planning, would rise 17 stories, have 300 residential units, and offer the city a 45,000-square-foot shell for a school. Last week, the Council’s Land Use committee passed the proposal 17-4. Today’s vote signals the end of the city’s public review process for al rezoning applications that was kick-started in January when Community Board 2 first passed the proposal 30-7. Its only flat-out rejection, voting wise, was at CB2’s land use committee, where members voted 7-6 to reject the proposal.

Artwalk brings free art and music for cultural celebration
What will happen to St. Ann’s?