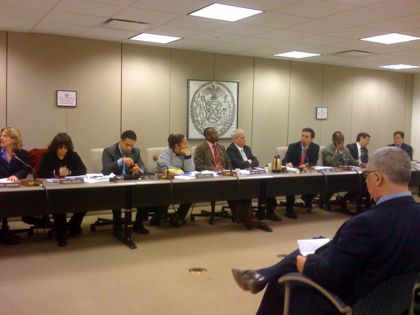 The Dock Street DUMBO project sailed through two key votes at the City Council today — passing 6-2 in the zoning and franchises subcommittee and 17-4 in the general land use committee. The full Council will vote on June 10, where it is also expected to pass following support by Speaker Christine Quinn, according the Observer.

The project, as it stands following amendments from Borough President Marty Markowitz and the Department of City Planning, would rise 17 stories, have 300 residential units, and offer the city a 45,000-square-foot shell for a school.

Just before the vote, Land Use committee chair Melinda Katz — who voted for the rezoning — made public a rider to the Walentases’ application that will require a public school in the project and for no fewer than 20 percent of the residential units be affordable.

Explaining her vote, Katz pointed to the the land use committee’s role to rezone a neighborhood and trust that the developer will follow through with the plans. In this situation, “priorities need to be given priority, and at the end of the day, you hope there is a good outcome of a project,” she said, adding that she “respects” the work the Walentases have done in DUMBO.

David Yassky, who vocally opposed the project and has said he would be “frosty” to his colleagues if they support it, said immediately following the vote, “I’m disappointed that the Council has done the wrong thing, disappointed that the Committee made a great mistake and one that will possibly damage the bridge … and will permanently change the experience of walking across the bridge and that’s a shame.

As Yassky spoke, Councilman John Liu, who voted against the project, passed by. Yassky shook Liu’s hand and said, “That was a smart vote.”

(Note: Yassky, Liu and Katz are running against each other for city comptroller.)

Lead opponents on the case, Doreen Gallo and Gus Sheha of the DUMBO Neighborhood Alliance, said they had no comment.

UPDATE: Sheha through a spokeswoman sent out the following statement:

“Today, June 5th 2009, after 126 years of being unencumbered and on display for the world to enjoy, the Brooklyn Bridge was sold by the NY City Council Land Use Committee … This is a very sad day, as political contributions and special interests have reinforced the public’s perception that the ‘will of the people’ is an empty phrase, something rendered non-existent in our democracy in this era of checkbook politics. Collectively we say shame on all those who will bargain our national monuments and history to bankroll careers that do everything but serve the will and the voice of the people and public interest. Your legacy will leave an indelible stain on human history and world beloved landscape of our city.”

But by the elevators, Councilman Leroy Comrie (D-Queens), who voted for the zoning change, leaned over to Gallo and said, “The bridge will still be standing tomorrow.” Without missing a beat, Gallo shot back, “Why crowd it.”

Brooklyn Heights Association Executive Director Judy Stanton, whose organization aggressively searched for alternative sites for a public middle school beyond Dock Street and opposed the project, said she knew the Council would vote in favor, anyway.

Project developer Jed Walentas sat stonefaced throughout the hour-long vote, and then released the following statement:

“From the outset of this process, we have worked hard to demonstrate that Dock Street Dumbo will be a thoughtful, contextual, positive addition to the neighborhood and we are both proud and grateful that the project has earned such widespread support on the merits. Two Trees is honored to have the opportunity to provide the community with a new middle school and Dumbo’s first-ever affordable housing, all in an environmentally friendly green building that respects the surrounding neighborhood and its historic character.”

Here’s a full rundown of who voted which way: