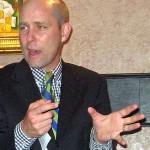 The New England Society in the City of Brooklyn (disclosure: your correspondent is Secretary of the Society) held its annual meeting and spring dinner last Thursday at Pete’s Downtown Restaurant, at the foot of Old Fulton Street in DUMBO. In keeping with tradition, the entertainment of the evening was a talk about a prominent New Englander. In this instance, Robert Sullivan (photo above), author of The Thoreau You Don’t Know: What the Prophet of Environmentalism Really Meant

, spoke about the famous nineteenth century Massachusetts eccentric best remembered for his books Walden and Civil Disobedience, and largely regarded as brilliant, but a crank and recluse.

Sullivan quickly disposed of the notion that Thoreau was an antisocial oddball. During his sojourn at Walden Pond (which, at the time, was not a pristine locale), he frequently visited friends and family. His cabin, situated in a woodlot, was a parody of the new fashion among the well-to-do of Boston for country houses. He secured the help of companions to raise the walls and roof, in a nod to the then-dying tradition of house and barn raisings. 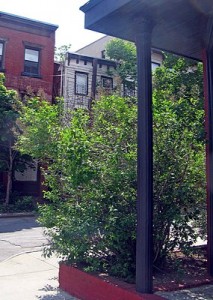 Thoreau was also a frequent visitor to Brooklyn. He and Walt Whitman were good friends, and they would take long walks together that probably traversed parts of the Heights, along with Fort Greene, Vinegar Hill and what has come to be called DUMBO. Sullivan followed what he thought was the likely course of one of their walks and, at the corner of Hudson Avenue and Plymouth Street, in Vinegar Hill, found something he considers characteristic of old New England homesteads: a lilac bush. Your correspondent was able to find that bush today; its photo is above.

Sullivan is also the author of Meadowlands

, which recounts his adventures canoeing with a companion through the northern New Jersey wetlands in search of the final resting place of Jimmy Hoffa, which they didn’t find, although they did find the grave of the old Penn Station; Rats: Observations on the History and Habitat of the City’s Most Unwanted Inhabitants

; and several other books.