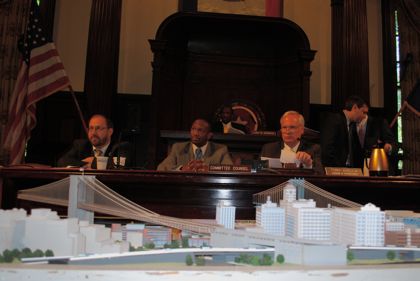 The City Council zoning and franchises committee hearing about Dock Street lasted five hours today, with three hours of public testimony and two of the council members grilling the School Construction Authority and developers about the plan.

The hearing marked the beginning of the end for the project, a proposed 17-story residential tower and 43,000-square-foot middle school on Dock Street in DUMBO by Two Trees Management.

The public testimony portion was a rehashing of many of the same arguments already presented for and against the project, but the real drama came during a discussion of the project’s promised school. We have video footage of what went down, and will post it ASAP.

(Update: Here‘s the Brooklyn Paper’s take on the hearing)

During the testimony of SCA counsel Ross Holden, Councilman Eric Gioia of Queens brought up the FOIL request released by Councilman David Yassky, which revealed an email between SCA officials that casts doubt on their seriousness of looking at other possible school sites within District 13.

(The full FOIL request, via PDF, is available here, with a follow-up letter from Yassky asking for more.)

According to the email, the official writes:

“David Yassky referred this guy to me because he has property in Brooklyn on Water Street between Bridge and Jay … Now I know that if we don’t do the Walentas project that we don’t really want to do anything else over there, but I think we have to follow up on this just so we can say that the Walentas project is such a good deal.”

At the hearing, Holden clarified: “None of the other sites SCA explored provided such an economically feasible option.”

“We prepared our alternative-site analyses as we would anywhere else. No one at all came to SCA with any recommendation that would provide us with as minimum a cost [as Two Trees]. I can’t comment on who wrote that email but there are emails where SCA took issue with Two Trees that were not produced,” he said.

The Eagle published a story this week outlining some of those memos, which revealed information about the SCA’s decision-making process. Holden said on Thursday that the SCA looked at spaces at 72 Poplar St., 37 Hicks St., 205 Water St., and PS 8 itself, but each location would require expensive property aquisitions and build-outs.

But still, Councilman Eric Gioia of Queens would have none of it.

“The way I read these emails is, ‘let’s … humor this guy because we have no interest in it’. This is not how government is supposed to work. This is how people are afraid of how government works,” he said. “It’s refreshingly honest, but disarmingly so.”

He added, “This is probably the most disturbing email I’ve seen in my eight years in government.”

Then Councilman Robert Jackson of West Harlem moved in for the kill. He asked Holden how much it would cost to build out the school and how much the city stands to save.

Holden: “I don’t know precisely,” and fumbled his way through lines of related questioning.

Two Trees’ attorney, Ken Fisher, said the land is worth $100-200 per square foot and $200 per square foot for the shell, and the space will be 43,000 square feet. The SCA has allocated $42 million in its proposed five-year Capital Plan to the project.

Yassky, who loudly opposes the project, was none too pleased with the situation.

“This is a disgrace,” he said. “You can dress up the email anyway you like but that is a betrayal if a public interest and reason alone to distrust the school’s argument here.”

He added, “When this proposal is rejected, you had better come back and build us a middle school or else you have made it clear that you are participating in a sham.”

From there, speakers for and against the project voiced their concerns. For those who have followed the debate so far, many of the same arguments were repeated: Views and the experience of the bridge will be ruined vs. We need this school.

The Council committee will vote in the coming weeks, and we will of course keep you posted.