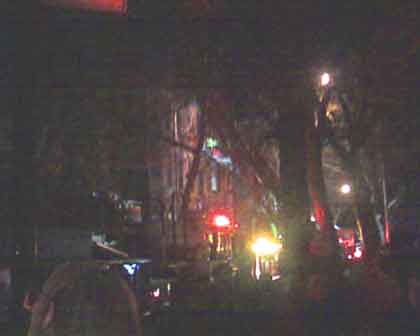 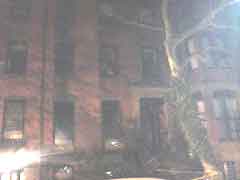 There was a huge fire at 42 Remsen Street — a 3 story brownstone — where no less than 6 firetrucks were called to contain the blaze. Brooklynheightsblog was on the scene with grainy photos and no press pass. We hope no one was home at the time, and we pray no one was seriously hurt. UPDATE: Apparently this is the same building that was on fire during Thanksgiving last year, see below for details. In the aftermath of the blaze it looked like all floors of this building were affected by the blaze, and we noticed in particular that the firemen were concentrating on the 3rd floor when we arrived. We will provide details as further events warrant, but if anyone knows anything about this incident or the building, please comment below or email us.

This same apartment had a fire on Thanksgiving weekend.  Apparently there is a not so right in the head woman living there who collects a lot of paper and garbage.  The word back in November was that stacks of newspaper stored on or near her stove had caught fire.  The family that lives on the ground and parlor floors, who financed the rebuilding of the outside staircase which won them building a Heights Assn award a few years back and had a very, very nice apartment were understandably beside themselves.  I believe they suffered a lot of water damage then, and I don't even think that they had moved back in yet.  This obviously is much worse – it looks like the building may need to be gutted.  I live a few doors down, and I hope this will get the woman out of here – before she burns the whole block down.  They said she was seen outside the building during the fire, and there was no ambulance action, so I believe there were no injuries.

Tonight's fire at 42 Remsen St. was a replay of another that occurred on November 25th of last year. At both incidents, the fire started in the top floor apartment. The occupant still had plywood boards up in the windows, and firefighters were faced with the same "Collyers' Mansion" conditions they were in November. This time, a two-alarm response was required to get a hold on the fire.