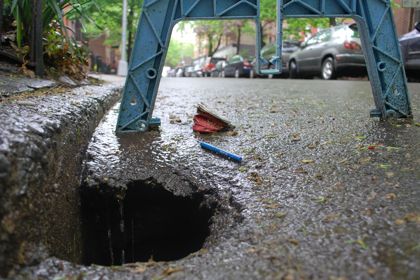 There’s a hole in the street in front of Assumption Church on Cranberry Street — and the city is sorting out who will fix it.

An eight-inch part of Cranberry Street, between Hicks and Henry streets and just by the curb, collapsed over the weekend, and was marked off this morning with a board and half a sawhorse. Rain runoff was pouring into the cavern, which was about a foot deep.

“We inspected [the hole this morning] and we’re waiting determination to the cause of it, and then, with that, we’ll see who makes the permanent repairs,” Gastel told BHB.

The difference? How the roadway broke — that is, from above or underneath, Gastel said. The agency lists a full explanation of the different types of road defects on its Web site. In the above photo, that blue line is a Pilot Precise pen, for size reference.

For future reference, you can use the DOT’s online form to report a pothole here.