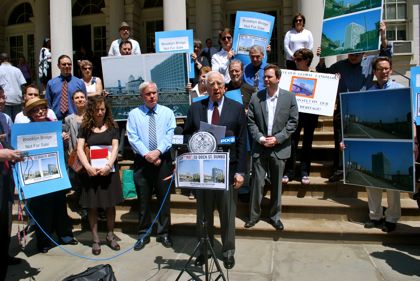 Dock Street opponents took the steps of City Hall today, and brought out their biggest gun — Brooklyn Bridge historian David McCullough — to rally for the cause.

McCullough, who published a column in this week’s Newsweek explaining his views against the controversial proposed Dock Street project, said on Tuesday that the bridge should be left alone.

“We wouldn’t let a 17- or 18-story building go up next to the Washington Monument or the Statue of Liberty — of course not,” he said. “The bridge should be preserved, protected, and respected.”

In a follow-up statement, he said:

In his initial proposal for the Bridge, written in 1867, the brilliant John A. Roebling, its designer, said that the finished work would stand down the years as a testament to the community that built it. That was 142 years ago. And there the bridge stands today, just as he said, a testament to those who built it. Let what is decided now, in the year 2009, be a testament of our appreciation for this rarest of structures, the gratitude we feel as we enjoy it, the pride we take in it.

The controversial proposed project goes before the City Council’s zoning and franchises committee in May for its latest round of public discussion about the rezoning application. Developer Jed Walentas wants to build an 18-story rental tower next to the Brooklyn Bridge, and needs the area to be rezoned first, thus launching a seven-month public review process that is nearing its end.

“How foolish would we be to allow a building to go up there,” he said. “I don’t think any of us want to be the one who allowed for people to walk past and say, ‘Who the heck put that up?’ Under no circumstances can [the Walentases] make this project palatable to me.”

In related news, project supporter Councilwoman Tish James sent a letter to her colleagues today as well, outlining her views. The full letter is here [pdf].

I am fully aware of the concerns being expressed by some project opponents about the building’s proximity to the Brooklyn Bridge, so I have taken the time to walk the neighborhood to evaluate their issues and have consulted with numerous community leaders and residents. I’ve concluded quite comfortably that Dock Street Dumbo does not pose any kind of “threat” to the Brooklyn Bridge, which is a position clearly shared by both the local Community Board (CB #2 approved the project nearly unanimously) and by the City Planning Commission, which overwhelmingly voted in favor of the project earlier this week.
…Not only am I confident that this project will not cause any harm to the Brooklyn Bridge or the Dumbo community, but on the contrary, I think its new public middle school and affordable housing will generate a great deal of good for the residents of Downtown Brooklyn. I have attached a copy of an op-ed article I recently wrote in the Brooklyn Daily Eagle – “Dock Street Project Provides Rational Answer to Real Need” – that further explains my rationale for supporting the proposal and lays out the need for more of these types of thoughtful public-private partnerships across New York City. (I also have attached a couple of additional news clips from the local papers for your review as well.)

The City Council hearings will be in May, and we’ll update you with the date and time when we get it.