If the quality of last night’s performances at the Brooklyn Folk Festival holds up through the rest of the weekend, this will be the best Festival yet, and that’s clearing a high bar. The opening act was Tenores de Aterúe, an a capella quartet who do traditional music from Sardinia, an island to the west of Italy. Their harmonies were spine-tingling, especially on their rendition of the Agnus Dei from a mass sung on Sardinia’s northern, French neighbor, Corsica, which history buffs and Francophiles will recognize as the birthplace of Napoleon Bonaparte. 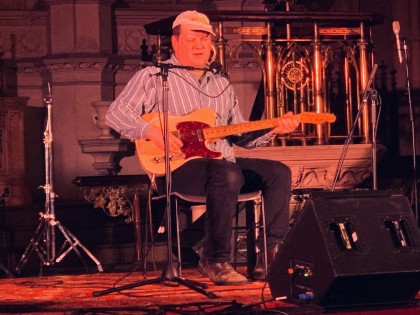 Jake Xerxes Fussell is a blues and country singer and guitarist originally from Georgia but now living in North Carolina. This former Floridian was especially taken by his rendition of “The River St. John’s,” which you can hear here. 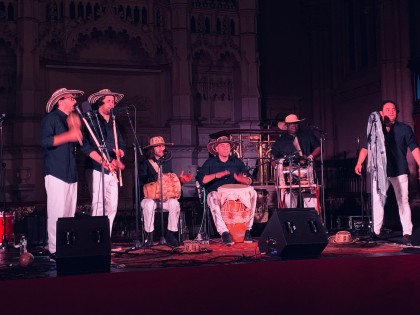 La Cumbiabamba NY perform music of the Caribbean coast of Colombia, a syncretic style combining indigenous American, African, and Spanish influences. Their rhythms were so compelling that the whole front of the room was soon filled with enthusiastic dancers. 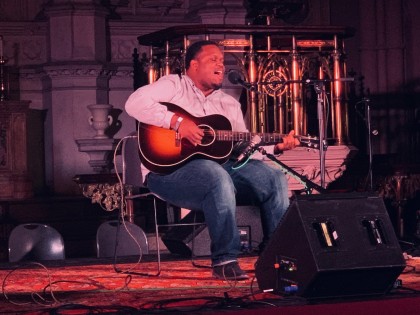 Jontavius Willis is a 22 year old bluesman fron Georgia, looking forward to college graduation this May. He proved himself a master vocalist, guitarist, and harmonicist in a performance that spanned many styles. This rail buff particularly enjoyed a piece in which he did train sounds on his harmonica, calling on the audience to supply whistle sounds at appropriate moments. 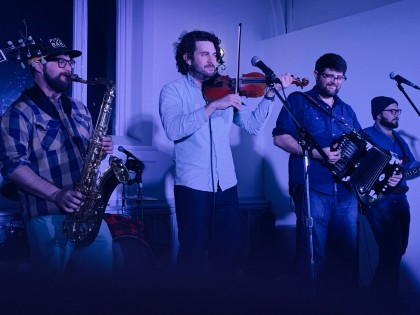 While these acts were performing on the mainstage, there was a Louisiana dance party in the Parish Hall. The Revelers, a hot band from Lafayette, capital of the Bayou State’s Cajun country, had a large crowd dancing. 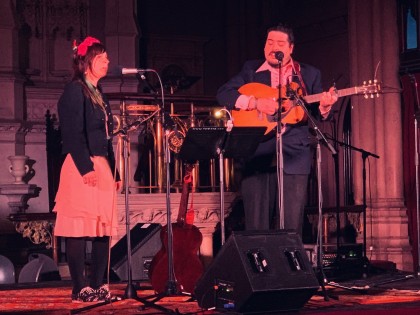 The final act was by two local favorites, Feral Foster and Ali Dineen. They did a mix of classic and original country and folk, including a rendition of the Sons of the Pioneers standard, “Cool Clear Water.”

There’s plenty more to come today and tomorrow; the schedule is here.