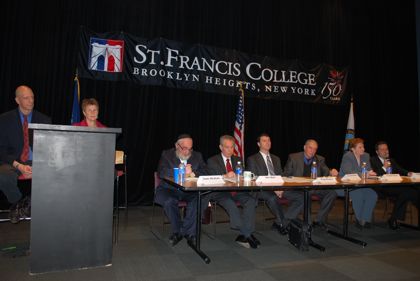 Monday night’s debate between six (of the seven) candidates running for City Councilman David Yassky’s seat (which may or may not be vacated) was, to be blunt, long and routine. To their credit, moderators Kenn Lowy and Lucy Koteen kept things rapid-fire, pushing the candidates to answer questions in two minutes, then one, and then 30 seconds.

The Brooklyn Paper‘s Politicrasher has a snarky take on the night, and news blogger Aaron Short, who focuses on the northern stretches of the district, has his own breezy version.

The Central Brooklyn Independent Democrats and the Independent Neighborhood Democrats hosted the evening at St. Francis College. On Thursday night, CBID will hold its endorsement meeting for the 33rd District seat.

But since there were actual topics discussed here and only about 100 people came out in the pouring rain, BHB will dissect how the night played out:

The candidates spent much of their allotted time admitting vocally that they all agreed with each other to lessen out-of-scale development, allow same-sex marriage (except Isaac Abraham), and create more affordable housing. They also share an affinity for newcomer State Senator Daniel Squadron.

Isaac Abraham, the Hasidic businessman from Williamsburg, explained that his “entire life” has been devoted to helping communities, and, “If I had to put in one word why I was running, it’s because I’ve been here, done that.” (Um?) But, “If you don’t know me, just give me a little time and you will get to know me,” he appealed to voters.

Ken Baer, an accountant and environmental advocate, outlined three of his four goals, including having more community control over developers, improving public schools, and protecting the city’s water supply. (The fourth was lost when the timer ran out.) “Brooklyn needs a fighter, not a yes man,” he said, practically quaking. “I don’t owe anyone anything, and what matters to me is the health of our communities.”

Newcomer Doug Biviano — a Heights resident since 2000 — talked about how pro-“livable communities” he is, going so far as to say community boards should have “binding veto power” for the decisions it makes. And, he is running to protect our institutions and local businesses.

Ken Diamondstone, a longtime LGBT activist, outlined his vision for changing the city: “If there’s anything we’ve learned from the economic collapse, it’s that the city must diversify its base and economy.” To that end, Diamondstone wants to see an end to out-of-scale developers and more green developers and biotech industries.

Jo Anne Simon, a civil rights attorney and community leader, emphatically said, “I’m running for city council not because I need the job — but because there’s a job to do.” That job involves fixing up education, working together, and creating sustainable neighborhoods.

And Evan Thies, a former Yassky staffer, rhapsodized about the “personal rewards” of the hard work of a councilman, and pointed to the wonky policy changes he hopes to see in the Council to spend money “smarter.” “Now is the time for effective government, for the people who know how to solve these problems,” he said.

Q&A
During the question-and-answer section, it was a sweet series of nice fights. Each candidate thanked the other for his/her answers, agreed with what he or she said, and tried desperately to add something new. Some highlights:

On the topic of same-sex marriage, each candidate — barring Abraham — said it was a civil right and discrimination to not allow it. Abraham conceded that he’s all for allowing equal rights to gay couples.

Thies, on the topic of over-development, said the city has had a “ready, aim, fire” approach and it hasn’t sufficiently taken into account its effects in the community. Everyone agreed.

Rent-stabilized housing? Bring control back to the city level! Repeal the Urstadt Law! Bring in real affordable housing, not systems where earning $80,000 per year is the threshold, they said.

Mayoral control? The mayor already has too much control! Give parents more accountability. Simon suggested scaling down the Education Department’s accountability office and returning the workforce to teaching. And there aren’t any well-rounded curricula anymore, Diamondstone said. Everything is taught to the test.

Housing in Brooklyn Bridge Park? No, no, no, no, no and no. There’s no precedent for housing in a park, and let’s not start here. Also, Squadron’s plan is a big hit.

Dock Street project, to include a public middle school in the 18-story residential tower near the Brooklyn Bridge? Absolutely against it, et al. Don’t put your building in my view corridor. Diamondstone did get a bit saucy, saying, “It’s disturbing to see developers dividing a community by providing something we need, and using power to play by a different set of rules.”

So that was the night. Stay tuned for how CBID and IND vote.