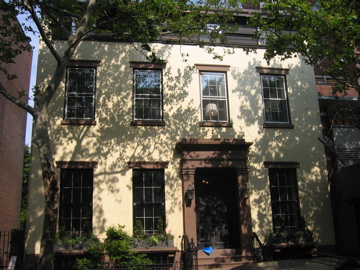 Brownstoner reports that Sotheby's is offering up 70 Willow Street as a $40k/month rental:

If you're looking to drop half a mil a year on rent, have we got the place for you! Okay, actually, Sotheby's has the place for you, but whatever. The historic and storied house (Truman Capote once hung his scarf in the ground-floor apartment) at 70 Willow Street in Brooklyn Heights is now on the market as a rental for $40,000 a month. The 1939 Greek Revival home is on an extra-wide lot and boasts a prize-winning garden. (We published photos of its window boxes back in June of 2005.) We were particularly jazzed by the back porch. Imagine the lazy summer afternoons out there. Can anyone think of a more expensive residential rental to have come on the market in recent memory?

UPDATE: Brownstoner also reports (via NY Sun) that 166 Montague Street is being converted into condos:

Buried near the bottom of last week's encyclopedic article the the New York Sun about Brooklyn development was this morsel: The Franklin Trust Building at 166 Montague Street is being converted from office space to residential condominiums. As The Real Deal reported first in its February issue, the 10-story, 50,000-square-foot building will get one more story added; the $10 million conversion will include a rooftop terrace, a sky-lit health club and new balconies. Not sure how new balconies would make it past LPC though…Regardless, this has the potential to be one of the premier buildings in the borough if it's done right.