The clouds parted and the sun shone brightly on Tuesday afternoon as if to say “FINALLY” as the stretch of Columbia Heights near Orange Street was proudly dedicated to Emily Warren Roebling, the woman credited-only in modern history-with the completion of the Brooklyn Bridge. According to the New York Times’ Overlooked Obituary, Emily was born in 1843 in Cold Spring, NY the second youngest daughter of State Assemblyman Sylvanus Warren. She was educated at a prestigious Washington, DC boarding school where she studied history, astronomy, French and algebra along with the requisite subjects of the day, housekeeping and needlepoint.

She married Washington Roebling, the son of Brooklyn Bridge Chief Engineer John A. Roebling in 1865. When John died of tetanus in 1869, her husband took over construction of the Bridge. But soon after he became bedridden by “the bends.” From that day on, Emily carried out the chief engineer’s duties, including trekking down Columbia Heights for daily site visits, negotiating supply orders, overseeing contracts and liaising with politicians and the Bridge’s Board of Trustees. 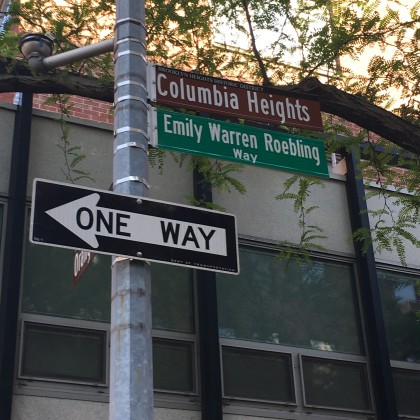 Three times Great Grandsons of Washington Roebling, August and Chase, unveiled the signage after the dedication.

Councilmember Stephen Levin described the challenges Emily faced, “When politicians tried to take her husband off the project, she fought back, so that the Bridge stayed under the Roebling name…Emily regularly faced criticism because of her gender and had to downplay her leadership role so that the project’s success would not be put into jeopardy. The Bridge’s Board of Trustees even accused her of not being ‘right in the head.'”

When the construction was completed in 1883, Emily was the first person to cross in a carriage, famously accompanied by a rooster as a sign of victory. Later in life, Emily went on to earn a law degree from New York University, champion many women’s issues and travel extensively-even attending the coronation of Tsar Nicholas II in Russia. In a letter written to her only son, John II, Emily proclaimed,

“I have more brains, common sense and know-how generally than have any two engineers, civil or uncivil, and but for me the Brooklyn Bridge would never have had the name Roebling in any way connected with it!”

Great, Great Grandson of Emily & Washington and Dumbo resident, Kristian Roebling spoke at the naming and had this to say after the event, ” I think that Emily would have been delighted to have had this dedication to her, this final recognition of her contribution to the building of the Brooklyn Bridge. She was sort of an open secret all along, even back at that time, but now this [ceremony] really adds to history recognizing her really profound contribution both to the building of the bridge and to the advancement of women in America in general.  And my family and I, August, Chace and Meg, myself are just delighted to have been here.”