More Flights over the Heights? 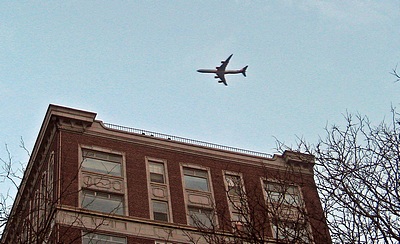 Recently, I’ve noticed that, on cloudy, rainy days, the sound of jet engines seems much louder than usual. I attributed this to some sort of atmospheric effect, such as moist air amplifying sound. Today, I was on the Promenade during a brief break in the rain, and saw several planes–including the one in the photo above–flying almost directly over the Heights on an apparent approach to La Guardia. Some comments on my “Park Progress” post below made me think about this. The plane in the photo is a long-range four engine airliner of a type that doesn’t normally use La Guardia. So, perhaps, as one commenter suggested, the Heights is under some bad weather alternative flightpath to JFK.