The Air Was Cold, But The Birds Were Out

Your correspondent ventured out at 8:45 yesterday (Saturday) morning in sub-zero wind chill to walk from his home on Montague Street down to the Pier 1 entrance. There he met Heather Wolf, author of Birding at the Bridge and guide for a bird walk scheduled for what proved to be a very cold morning. The only other walkers present were a man named Brian with his two young sons. Heather said she had recently seen woodcocks in a wooded area near the pier entrance; we looked, but found none.

Heather then led us to a path the cuts through the woods on the landward side of Pier One; a prime spot for birding, she said. She was right. Before long we saw a pair of American Robins foraging on the path ahead of us. Then, off to our right, came a rapid “Tap! Tap! Tap!” It was a Downy Woodpecker (see photo above). As we continued along the path, the little woodpecker kept a parallel course, stopping here and there for more tapping. On the same path we saw a Fox Sparrow, but it was too quick for me to get a photo.

When we reached the south end of Pier One, Brian said his boys were uncomfortable in the cold, so they left. At the same time, we were joined by another walker, Clint. 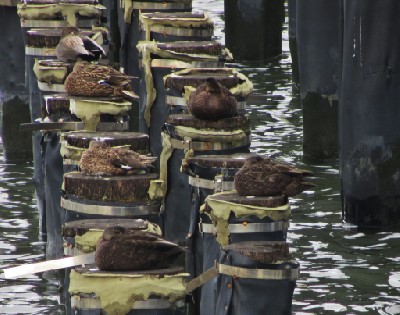 Coming down off the south side of Pier One we saw lots of waterfowl resting on the exposed pilings. Here are five Gadwall ducks, and, at top left, what appears to be a Mallard, getting some rest while the cold wind blows. There were two Buffleheads, a male and a female, paddling and diving, but they were too far away and too quick for photography. There were also Herring Gulls on the pilings and on the water. 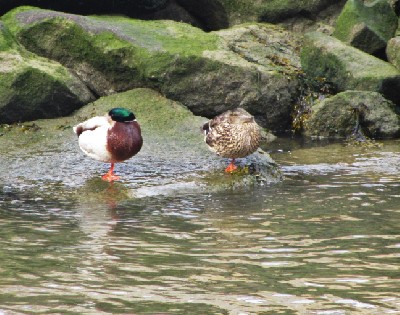 Coming to the landward side of Pier Two, we found two Mallards, male and female, also enjoying some shut-eye. 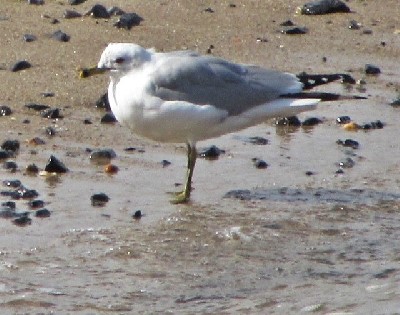 Standing on the water’s edge at the beach near Pier Four was a Ring-billed Gull. Heather also pointed out some Great Black-backed Gulls, but they were too far away for good photography with my little camera. 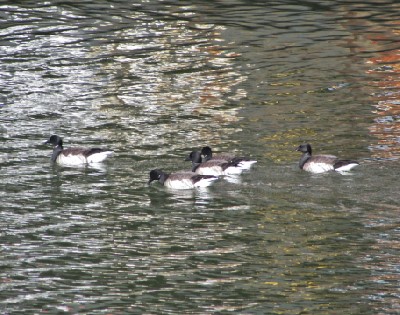 A squadron of Brants (small geese) glided across the water between Pier Four and the Marina. 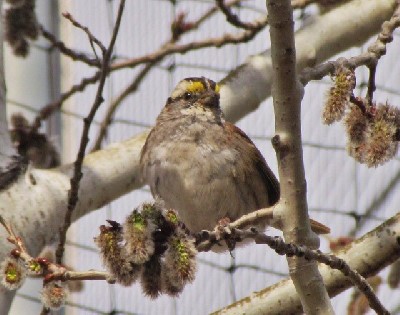 On the landward side of Pier Six we spotted this White-throated Sparrow. Out on Pier Six we saw a female Cardinal. but she was too quick for my lens. 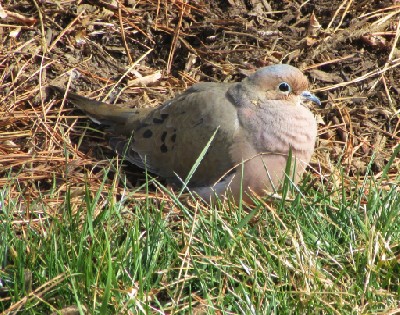 Also on Pier Six, which Heather noted has become a very good bird watching spot, we saw this Mourning Dove. 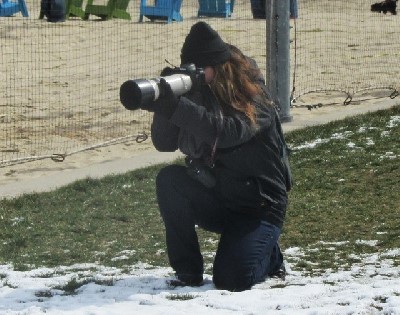 Here’s intrepid Heather, aiming her long lens at the Mourning Dove shown above. She led us on a very productive walk for a very cold March morning: by my count at least fourteen species, not including the ubiquitous house sparrows and pigeons. I’m looking forward to her next bird walk, which I hope will be in more clement weather.