Construction at 70 Henry St., former home to our beloved Brooklyn Heights Cinemas, is coming along nicely. Here’s a peek into the guts of the plot of land that is soon to be the site of a five-story, mixed-use development. 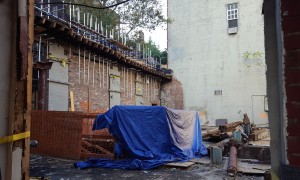 This morning, the congenial site supervisor named Mike from Jonico Construction, was keeping watch over the work. The target date for completion is 15 months from now, Mike said. In the photo above, you can see the columns, “probably there since before Lincoln was assassinated,” that are being preserved per Landmarks Preservation Committee’s insistence. The building will house five condo units, including one maisonette townhouse on the Orange St. side. The smallest condo unit will be 1,200 sq. ft. with four bedrooms. On the ground floor facing Henry St. will be a 1,000 sq. ft. commercial space.

What’s going in that commercial space? Let’s dispel the lingering rumor here for good. It won’t be a movie theater. According to Mike, it will be a retail space, but not a restaurant, since the space is not mechanically fit for one. When asked if he’s heard any leads on what types of businesses are interested, Mike said he hadn’t heard. But he figured the neighborhood could use a women’s and/or children’s retail shop of some kind. He’s a smart one, that Mike, we did just lose Heights Kids afterall.

While the neighborhood awaits the completion of this building, let’s have one last nostalgic look at what was once there. 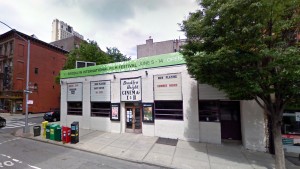