At a press conference on Thursday, State Senator Daniel Squadron urged the City to keep the Pop Up Pool in Brooklyn Bridge Park open past this year until plans for a permanent pool are devised. (This season, the pool’s fifth, is meant to be its last).  Flanked by Brooklyn Borough President Eric Adams, City Council Member Steve Levin and parents and children representing Love Our Pool, among others, State Senator Squadron released the results of a survey and petition signatures. “The results are in. The Pop Up Pool has made a big splash and we can’t let it dry up” said Squadron.

The report highlights just how popular the pool really is.  Of the 189 visitors surveyed, 82% come from outside of the pool’s zip code, 60% said it is the only public pool they visit, 64% of respondents visit more than once a month and 80% sited the pool as the Park’s most important feature.

Brooklyn Borough President, Eric Adams spoke poignantly about the pool’s importance as a place for children and families to experience the borough’s diversity first hand.  “Brooklyn is not defined by zip codes that have imaginary walls. When you have a pool like this, you tear down those walls and you say that ‘Brooklyn Bridge Park is a place to bridge relationships.’  This is a must.  And I am willing to put in my capital dollars with the city to move towards making this pool a mainstay.”  Councilmember Levin seconded, “[The pool] is the type of public experience that parks are supposed to be.”

What was most evident from the event was the impact the pool’s closure would have on the families that frequent it.  While it wasn’t the sunniest or the hottest of days, the pool was bustling with activity nonetheless.  Speaking from the podium as children splashed, Love Our Pool organizer, Suzanne Quint said, “Closing a well-loved pool, and closing it without a replacement plan, does not serve the thousands of Brooklyn families who rely on this pool to make it through the hot summer and learn to swim.” 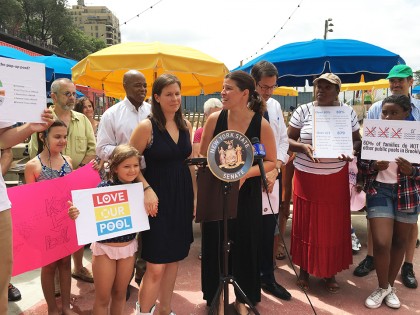 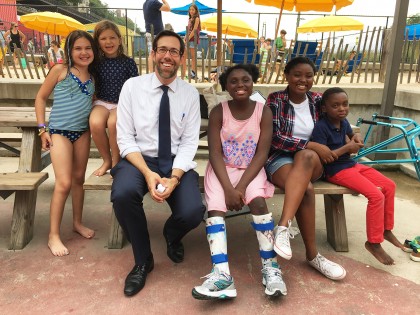 Senator Squadron with fans of the Pop Up Pool.

Alexa Suskin, a Cobble Hill resident and Love Our Pool organizer brings her three kids to the pool regularly.  She shared, “I can bring my kids aged 6, 4 and 2 and I don’t have to worry about losing them [in a large crowd].  My oldest one can touch the bottom all the way across. The other two can hang out with me in the shallow end. There’s really no other place like it.  I think it’s really telling that people come from all over Brooklyn. And my kids get to play with them.  My oldest starts her games of Marco Polo with kids from all over the city.”

Nicole McCarthy of Brownsville attends the pool with her three children, one of whom has cerebral palsy.  “We take the Access-A-Ride and stay all day.” She invites friends from NJ to join them.  Adding, “its an oasis.”  Brooklyn Heights resident, Hanan Kenyatta avails herself of the pool with two of her three children “almost every day.  It’s like a resort, it became our vacation.” 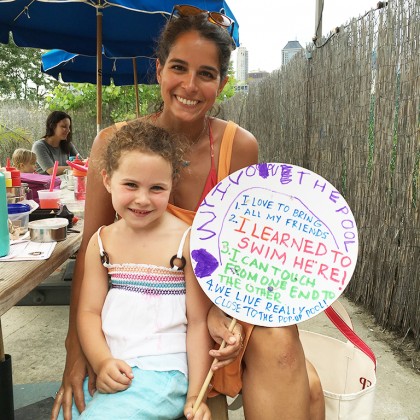 Their smiles say it all. Alice and her Mom Rebecca love the Pop Up Pool.

As reported by the Daily News, Brooklyn Bridge Park has plans to create a water feature in place of the pool that in the cooler months would be converted into a performance space. Brooklyn Bridge Park Vice President Belinda Cape is also quoted, “We love the Pop-Up Pool too, and we’re eager to work with our local elected officials to secure funding for a larger, permanent pool for Brooklyn Bridge Park. We’re excited to move forward with more than three acres of new parkland on the Pier 2 uplands.”