Like many of you dear neighbors, I knew Bonnie Burke as the ebullient waitress at Henry’s End, who always wore elaborate dangles on her ears and a dazzling smile on her face. Whoever you were, she just seemed so happy to see you, and whatever dish you chose, her reaction was always an enthusiastic “Alright!” Her rousing endorsement made the choice seem wise and the dish tasted better for it.

If you’re a regular at Henry’s End, then you know that Bonnie retired a couple of years ago. What you may not know is that she worked there for roughly 30 years and made Brooklyn Heights her home for the last 38. And those who know her personally know what a treasured figure she is in this neighborhood of ours. When I ran into her recently outside the Clark St. station, I had to ask if I could write a feature about her for this blog.

Bonnie and I met at Vineapple and talked amongst the hipsters pecking away at their Macbook Pros. Bonnie gave a big thumbs up to the latte served there. “That’s a good, strong coffee!” Bonnie was diagnosed with Alzheimer’s about a year ago. She’s still highly cognizant, but due to her fading memory, much of the fact-checking was done through her husband Dr. Stephen Messier, or “just Steve” as he likes to be called. Bonnie is doing great despite the Alzheimer’s, although her one regret is that she recognizes the many customers who greet her warmly on the street, but she can’t remember their names or details about their families and lives. “It’s very upsetting,” Bonnie said, “but I do remember all of their faces.”

I asked Bonnie about Henry’s End, and she spoke about the camaraderie amongst the staff and her fond memories of the original owner, Gary Pomponio, and the gregarious chef Clark Pike, who passed away in 2014. She didn’t seem overly nostalgic about her run at Henry’s End, however, perhaps because she hasn’t had enough distance from it yet. Her customers certainly miss her though. Google “bonnie waitress henry’s end brooklyn” and you can see the heaps of online praise. “Best waitress in NY/Brooklyn/ever” comes up frequently. 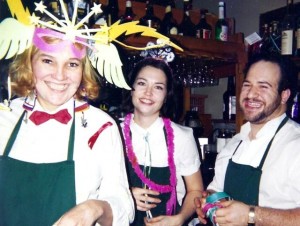 Bonnie and colleagues at Henry’s End, New Year’s Eve, circa 1995.

Bonnie was born in Chicago, but her family moved to Greenwich, Connecticut for her father’s job at an advertising company in the city. “So your father worked for an ad company in Manhattan, in the 50’s and 60’s, and commuted in on the Metro North? You know that sounds just like ‘Mad Men,’ right?” “It was exactly like that,” Bonnie laughed, “the smoking, the drinking, the many nights he didn’t make it home, boy do I have stories!” “And your mother, was she a long-suffering wife?” “Long-suffering alright, and usually furious!” Bonnie laughed again.

I learned from Steve that Bonnie’s father, the late Edmund Burke, worked for BBDO, the advertising company believed to have inspired the fictional Sterling Cooper. Edmund was tall and handsome, much like Don Draper. His most prominent client was Schaefer Brewing Co. and he’s credited with the once famous ad slogan, “Schaefer is the one beer to have, if you’re having more than one.”

As for Bonnie’s mother, she was, well, difficult. And we’ll leave it at that. Her mother’s membership in the Christian Science Church also added to Bonnie’s complex upbringing. Bonnie was enrolled in CS schools for much of her youth. If you’re not familiar with the CS tenets, one of their core beliefs is to eschew medical intervention in favor of prayer and divine healing. Some CS parents have been convicted of homicide for allowing their children to die, rather than seek medical treatment for them.

Bonnie was having none of that. She rebelled against what she saw as a repressive religion and education. “Bonnie was a bad girl,” Steve half-joked, and because of that, she lacked the academic record that would get her into a decent college program. But she desperately wanted to be a writer. So she penned a letter to Roy Fisher, once the Editor of the Chicago Tribune, and then the Dean of the University of Missouri’s School of Journalism, and asked to be admitted. To Bonnie’s surprise, Dean Fisher wrote back and said her writing so impressed him that he was willing to give her a chance. And that’s how Bonnie earned a degree from U of M, a top journalism program at the time. She went on to work as a freelance writer for many years. 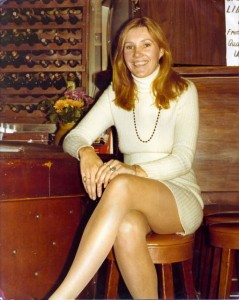 Bonnie met Steve in 1968 at a cocktail party in Newport, R.I., when they were 19 and 20 years old, respectively. Steve was studying at Brown University at the time and Bonnie at Vernon Court Junior College, an all-girls school that shuttered in 1972. Instantly smitten, Steve courted Bonnie for about six months, until they moved into an apartment together in Providence.

Fast forward to 1978, Bonnie moved to the big city to pursue her writing career and settled in Brooklyn Heights. Steve followed soon after. “We’ve been family since the day we met, though we didn’t get married until 2004,” Steve said. “We had brief periods of separation, but all through the years, we were always something – whether friends, lovers, spouses – but we were always family.” True to Bonnie’s non-traditional style, she and Steve lived in separate apartments next door to each other on Clark St. until about a year ago, when they moved in together so that he could take better care of her. 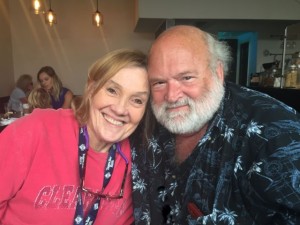 Bonnie was a writer and a waitress, but perhaps her best work was as a volunteer. At the start of the AIDS epidemic in the early 80’s, Bonnie joined the Gay Men’s Health Crisis, which at the time was a purely volunteer-run organization. Bonnie saw many of her friends and neighbors wasting away from the mysterious illness and she wasn’t about to sit idly by. She was head of the Brooklyn volunteer team for GMHC and helped organize the buddy-system, with volunteers assigned to patients to take them to doctors appointments, shop for groceries, and provide emotional support. She did all this while working full-time at Henry’s End and for her work, she was awarded a Presidential Citation, presented to her by Mayor Ed Koch.

These days, Bonnie still works up a sweat at the 6:00 a.m. spin classes at Eastern Athletic Club. She is “addicted” to sushi, and takes out from Sushi Gallery four times a week. Heights Café is also a favorite of Bonnie and Steve. Mostly, they love to walk on the promenade and just enjoy each other’s easy, comfortable company. The Pierhouse? Doesn’t seem to bother Bonnie. Perhaps a tiny blessing of a fading memory.

Yes, Bonnie Burke is doing “Alright!” When you see her, say hi, remind her your name, and tell her how you and yours are doing.