Some Highlights Of The Brooklyn Folk Festival

Your correspondent attended many of the performances that made up the Eighth Annual Brooklyn Folk Festival, held at St. Ann and the Holy Trinity Church Friday evening, April 8 through Sunday evening, April 10, presented by Down Home Radio Show and Jalopy Music Theatre. (There are videos and more photos after the jump.) This was my second Festival; I attended last year’s and reported on it here (even though, in the stagelights, my old camera turned some of the musicians blue) and enjoyed it very much.

This year’s Festival was, in my estimation, even better than the previous one. It opened with songs by Meredith Axelrod, a singer and songwriter from San Francisco. Her program entry listed her styles as “Blues, Ragtime and Country music”, and her set included examples of all of these. One of her blues was Big Bill Broonzy’s “Cryin’ For The Carolines”:

After playing solo for a while, she was joined onstage by Frank Fairfield (photo at top), who accompanied her on guitar. Later, during a set by Fairfield and Tom Marion, she joined the two of them onstage to play cello (she is a multi-instrumentalist as well as a superb vocalist). During that set, Marion played some romantic Italian tunes on his mandolin, which helped set the stage for the next performer. 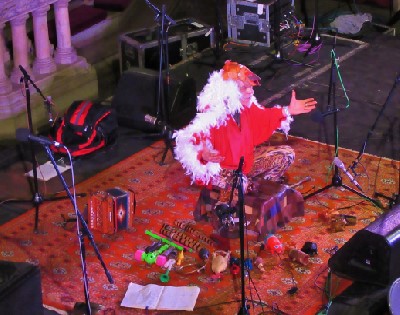 The program announced: “Extra Special Guest: Who Will It be?” The answer was Claudio Montuori the “Birdman” (photo above), a street performer from Rome (Italy, not New York).

In the clip above, he is performing on a Roman sidewalk. 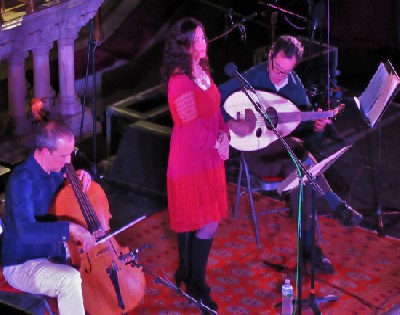 One of the highlights of Saturday’s performances was that of the Syrian-American singer Gaida (photo above). The program described her repertoire as “traditional Arabic maqams and more!”

In this clip, she sings the traditional American blues “Sometimes I Feel Like a Motherless Child”, accompanied by a combination of Arabic (oud and drums) and western (bass, piano, and trumpet) instruments. 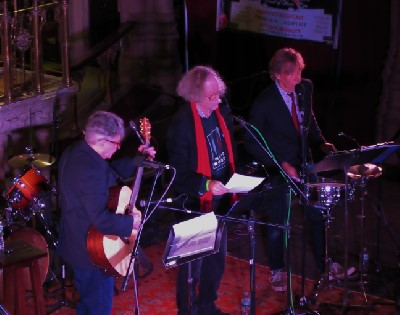 Also on the Saturday schedule were Ed Sanders (center in the photo above) and Robert Taylor (foreground), both veterans of the 1960s-’70s East Village folk-rock group The Fugs (there was a third musician, not identified in the program, with them).

In their set, they did some songs based on poems of William Blake, including “Auguries of Innocence” (see clip above) and several others with lyrics by the late Tuli Kupferberg. 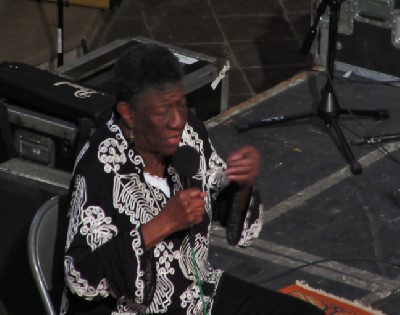 On Sunday afternoon, veteran civil rights activist Mattie Jones (photo above) began with a brief talk about how she became involved in the struggle while a student and her experiences since, then led the audience in singing some freedom songs, finishing with a rousing “We Shall Overcome”. 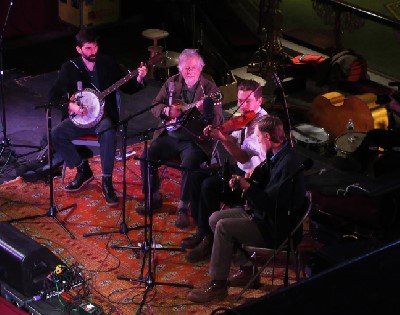 The Down Hill Strugglers, joined by John Cohen, formerly of the New Lost City Ramblers, performed a lively set of old time string band music. In the photo above they are, clockwise from top: Eli Smith (who also was organizer and host of the Festival), John Cohen, Jackson Lynch, and Walker Shepard.

The clip above shows the Strugglers and John Cohen doing “Sanctified” at the 2013 Brooklyn Folk Festival. 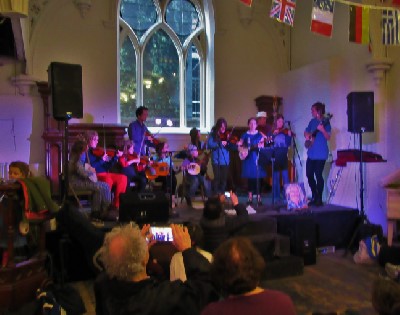 In addition to the performances on the main stage in the chancel area of the church, there were other performances, activities and workshops in the adjoining Parish Hall and workshop room. One of these was a recital by kids from the Jalopy Jr. Folk School (photo above), who showed great technical proficiency and understanding of the music. Another was a square dance, with many enthusiastic participants, to music by the Five Mile String Band, and called by Dave Harvey of NYC Barn Dance. 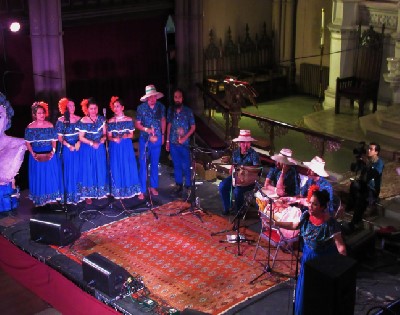 Bulla en el Barrio is a New York based nine person group who do “new and classic Bailes Cantados of Bullerengue“, a style indigenous to the Caribbean coast of Colombia. Bullerengue combines vocals, percussion, and dance.

The clip above shows Bulla en el Barrio in performance in various venues. 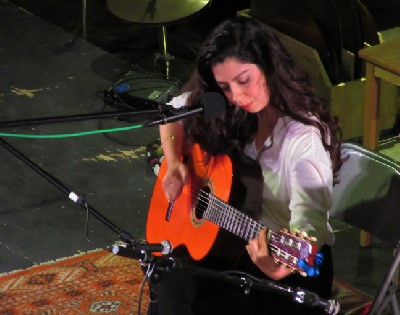 The final performance of the Festival was by Julia Patinella, a singer of Sicilian heritage who loves Spanish and Latin American as well as Italian music. Her set at the Festival combined several styles. Initially, she accompanied herself on guitar, as in the photo above. Later, she was joined onstage by the flamenco guitarist Cristian Puig.

The clip above shows Patinella and Puig performing at the Cornelia Street Cafe.