By Claude Scales on November 22, 2015 11:15 pm in Architecture, Arts and Entertainment, Brooklyn Heights

…but H.I. Feldman has left his name, in stone, in Brooklyn Heights for however long 70 Remsen Street stands, and it’s a very solid looking building. It was completed in 1929 and initially functioned as a “men’s hotel”, but is now luxury apartments. His name isn’t all Feldman left on the building, though. 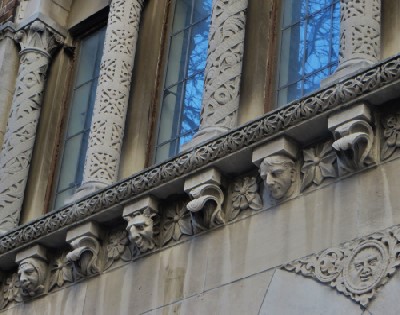 If you look at the lintel above the entrance you’ll see a row of grotesques (photo above). The second figure from the right in the photo is none other than…H.I. Feldman!

This was one of many interesting facts I learned from Robert Furman’s Brooklyn Heights: The Rise, Fall and Rebirth of America’s First Suburb, my review of which will appear here soon.

From another source, an architect who lives in my building, I learned that Feldman was something of a big deal, or at least made enough money to endow a prize that’s still being given. The Yale School of Architecture annually awards the H.I Feldman Prize for the best student design project. You can find Feldman’s name on another Heights building, the (in my estimation) beautiful Cranlyn apartment building at 80 Cranberry Street (corner of Henry). Completed in the 1930s, it exemplifies the high Art Deco style of the time. I’m not sure what to call the style of 70 Remsen; it seems to be poised somewhere between Beaux Arts and Art Deco. Maybe an architect who reads this can help me out.

The headline on this post comes from Paul Simon’s lyrics to “So Long, Frank Lloyd Wright”, which is on the Simon and Garfunkel album Bridge Over Troubled Water. You can hear it here (scroll to the bottom).