No. 1 idea: Toilet in Columbus Park! 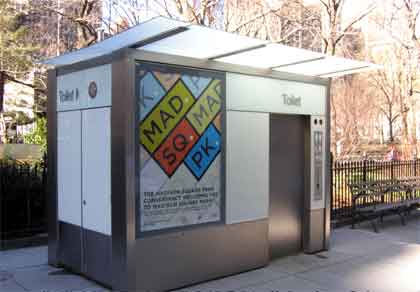 The city hopes to install an automatic public toilet at a spot in Columbus Park and Community Board 2 is all in favor of the movement.

The toilet station still needs final design approval for this location, and tonight, CB2’s Parks Committee will draft a letter of support for the project at its monthly meeting.

“The Community Board will indicate that we like the location and we like the building,” said District Manager Rob Perris.

The 12-foot-by-seven-foot toilet stations are coin-operated and self-cleaning, and automatically open if you’ve been in there too long (15 minutes). They are part of the city’s contract with the Spanish company Cemusa to bring shiny, glassy newsstands, bus stops, and newspaper racks to the city. The company finances its maintenance through advertising.