The People in Your Neighborhood: Dumbo Mom Demands Action for Gun Sense

Today, we are pleased to introduce “People in Your Neighborhood,” a Q & A feature that we hope will become a regular and welcomed addition to the Brooklyn Heights Blog.  In today’s installment, we spotlight Jaime Pessin (pictured left), the campaign lead for the New York chapter of Moms Demand Action for Gun Sense in America.  Jaime lives in DUMBO with her husband and two young children. She moved to NYC in 2005 and has lived in DUMBO since 2008.

What was the catalyst for your involvement in gun sense advocacy?

My son was in pre-K during the shooting at Sandy Hook Elementary School, and that event exploded my world. That 20 first-graders could be gunned down in the sanctity of their classrooms was unfathomable to me, and I was virtually paralyzed with grief. A few days later, Wayne La Pierre – the president of the NRA – held a press conference in which he argued that classroom teachers should be armed to protect their kids, and I had a mental picture of my son’s elderly pre-K teacher packing heat and wrestling a “bad guy” to the ground. That was when I got mad. That was the moment that kick started my activism.

How did you become involved with Moms Demand Action for Gun Sense?

During the week between the shooting and the “good guy with a gun” press conference, a friend had liked a new Facebook page that had been set up by Shannon Watts, a mom in Indiana who was as grief-stricken and enraged as I was. Somehow she connected with some moms in Brooklyn and in Silicon Valley and other places around the country, and Moms Demand Action was born. In the early days, it was a total frenzy, with people around the country reaching out and trying to start chapters. On Martin Luther King, Jr. Day, we had our first-ever March Across the Brooklyn Bridge and Rally for Gun Sense, with nearly 1,000 people turning out to demand stronger gun laws.

What’s amazing is that the organization was literally started on Facebook by a mom typing furiously on a laptop at her kitchen counter. Now we have chapters in every state, with more than 3 million members.

3) What is your role within the organization?

I have a couple of roles within the organization. I am the campaign lead for our NY state chapter, which means I help organize various efforts locally.  Obviously we have a huge focus on passing legislation nationally, but we’ve also got education and corporate culture campaigns, too.  For example, our BeSMART campaign encourages people to make sure their kids don’t unintentionally access guns…[and] helps educate parents to those risks.  We have a great presentation that we’d be happy to do at your PTA or church group or other community organization – reach out [to our NY Chapter Facebook page] if you’re interested.

The other role I have with Moms Demand Action is that I’m on a small team creating the Mother’s Dream Quilt Project. The quilt project is a series of quilts that incorporates fabric from victims and survivors of gun violence, along with squares created by people who haven’t been personally affected, but who care about the issue. You can see the first seven quilts and read the stories behind each square at our website. There are currently a dozen quilts touring the country. 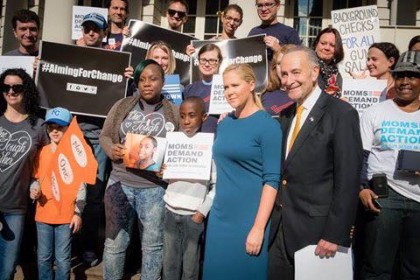 If you could pass one piece of gun sense legislation, what would it be?

I’m going to cheat and give you two pieces of legislation, because they go hand in hand. They both address the aspect of our gun problem that infuriates me most: Terrible laws in other states contribute directly to crime in our neighborhoods.

The first thing that would be a huge help in New York would be to mandate background checks on all gun sales nationally. A lot of people don’t realize that this is not already the law. Currently our system requires federally licensed firearms dealers to conduct a background check. So when you go to a gun store, you get a background check, it usually takes a couple of minutes, and then if your record is clean, you go on your way. But that law doesn’t apply to private sellers. So when someone posts online “I’ve got a few guns to sell, who wants to buy ’em”, they’re not required to do background checks before they sell those guns. Similarly, if a private seller brings 100 guns to a gun show, he can sell them all without conducting a background check on any buyer.

NY state has laws that require background checks on all gun sales. But that doesn’t stop people from buying guns in other states without a background check and bringing them to New York. In fact, 90 percent of guns recovered from NYC crimes were purchased out of state (if you look at the state as a whole, the number is 70 percent). In some of the recent high profile killings of NYPD officers, the guns were traced to Georgia.

If we enacted universal background checks on gun sales and a federal anti-trafficking law, we would be able to save a lot of lives.

How can other like-minded people get involved?  What does Moms Demand Action need right now?

The first step would be to fill out this form to join our local chapter: www.momsdemandaction.org/join

We’ve got a membership meeting coming up on the evening of Nov. 4 in Brooklyn Heights. We welcome any new members who would like to learn more about what we’re doing. You can RSVP here: https://act.everytown.org/event/moms-demand-action-event/1729/signup/

Is there is a special person in the neighborhood you would like to see featured? Comment away!