Seamus O’Toole to be honored on St. Patrick’s Day 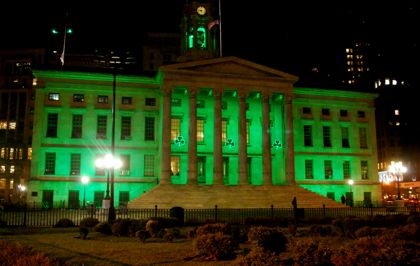 Borough Hall gets in the spirit early (BHB/Sarah Portlock)

O’Toole, the co-owner of the beloved Eamonn‘s restaurant and bar at 174 Montague St., died in a freak accident last September.

The breakfast starts at 8 am at Borough Hall. Marty, who is the head of the Brooklyn chapter of the Loyal League of Yiddish Sons & Daughters of Erin, is co-hosting the event with Brooklyn District Attorney Charles (Joe) Hynes and Al O’Hagan of Brooklyn’s Baile na nGael.

Per Marty’s press release, the other honorees include:

What will you be doing on St. Patrick’s Day?