Summer Has Come And Gone: Hotel Bossert Yet to Re-Open

The Brooklyn Daily Eagle’s “Eye on Real Estate” has been following the progress of The Hotel Bossert gut-renovation.  The project underway is to include 279 guest rooms and a rooftop restaurant.  Back in March they reported the “Waldorf-Astoria of Brooklyn” re-opening had been pushed back to this summer.  Yet, here we are one week away from Labor day and the remodeling of the former Jehovah’s Witnesses property seems no closer to completion.  A follow up post from August 26th reports inquiries by the Eagle vetted this response from co-owner David Bistricer, “We are moving full blast.” 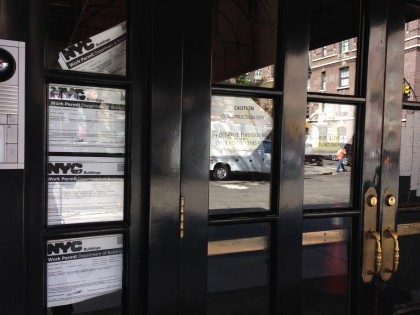 While the hotel has widely been described as a harbinger of increased retail and restaurant revenues, Curbed recently reported on a “glut” of hotels being built in Brooklyn.  The July 24th article sites a new report from Bloomberg Business, “there are 32 hotel properties planned or under construction in Brooklyn, but according to analyst David Loeb of Robert W. Baird & Co., developers are facing declining occupancies there as room costs decrease in Manhattan.”   As of March of this year, Bossert co-owners Bistricer and developer Joseph Chetrit had not named a hotel operator.