True to their word, the new Juice Press at 124 Montague St. (behind Kiehl’s) was up and running as of 10 a.m. this morning. There was even a small crowd outside when your intrepid BHB correspondent visited about an hour later.

“It’s been going very well so far,” said Caitlin Brisson, a Juice Press PR rep who was handing out bookmarks in front of the entrance, which faces Henry St. The sassy bookmarks came with phrases like “Don’t Listen to Your Parents,” and exalted the benefits of raw vegetables while bashing processed foods. 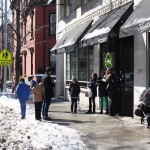 A small crowd stands outside the new Juice Press in Brooklyn Heights. 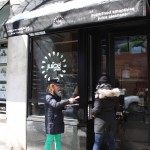 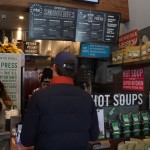 A customer waits to order at Juice Press. 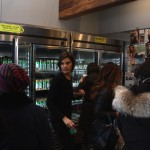 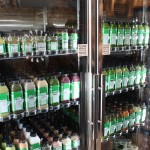 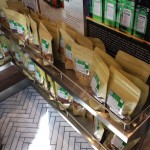 Granola by the register. 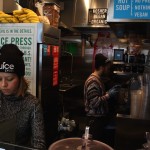 Not much more space behind the counter, either. 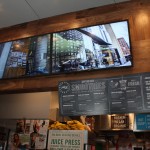 Juice Press propaganda beamed down from on high.

Inside, about a dozen customers lucky enough to receive an invitation containing a 50 percent-off discount coupon squeezed in beside one another to order fresh-blended smoothies with names including “Heaven on Earth” and “Fountain of Youth.” Others raided the massive cooler of cold-pressed juices on the wall. Your BHB eyes on the ground went for some of the raw granola in bags by the register. It’s pretty much standing-room only, although there is a small bench by the coolers.

While some younger patrons turned up their noses at free samples of kale-based juice handed out by employees, most seemed pleased with the store.

“It’s a good addition to the neighborhood. It makes sense,” said Bryan Weinstein, a father from Cobble Hill who found out about the new Juice Press opening via Instagram and came by with his wife Shari and daughter Nova.