Dr. Heather Thomson from Brooklyn Heights Veterinary Hospital contacted BHB to let us know about a couple of neighborhood dogs that have had recent run-ins with rat poisoning in Cadman Plaza. Fortunately, both dogs are going to be fine.

“It’s supposed to be put into a confined container, but that’s doesn’t seem to have been what’s happening,” said Thomson. “One client saw her dog get into it and brought it home to find out what it was.”

While Thomson couldn’t say where specifically in Cadman Plaza the dogs had discovered the stuff, she warns dog-owners to keep an eye on what their pets are rooting around with.

“The poison generally kicks in in a few days to a week, and the dogs could be acting perfectly normally,” she said. “If your dog ate it and you didn’t know it, the dog could end up bleeding out before you even know they’d been exposed to it.”

Thomson has been in touch with both the city and Cadman Plaza Park officials to impress upon the exterminating services to make sure that the poison is distributed appropriately so that it’s no harm to dogs.

If you think that your dog has come across the poison, call your veterinarian immediately.

1/12 update: Dr. Thomson sent along these photos of the poison, taken by the owners of the dogs: 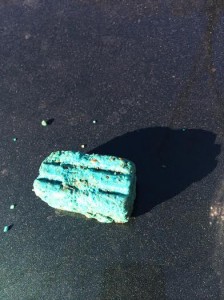 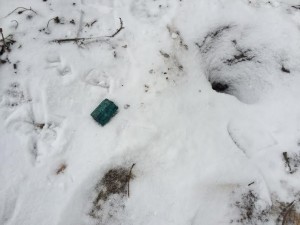 And next week we’ll have news on the upgrades we can expect when Dr. Thomson’s office at the corner of Hicks and Cranberry re-opens this spring!