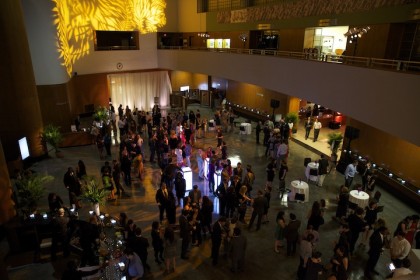 By brooklynheightsblog on October 2, 2014 1:55 pm in Brooklyn Heights, Real Estate

With more than 250 young, fashionably attired Brooklynites sampling the latest fare from local chefs while swaying to classic jazz last night in its majestic central library branch, the Brooklyn Public Library demonstrated that it has multiple means to address its considerable budgetary ills.

The Brooklyn Classic, a fundraising mixer now in it’s second year, underscores that BPL is not exclusively beholden to public officials when it comes to funding. By enlisting a potent community of young, forward-thinking professionals from all across Brooklyn to publicly support its programs, the Classic, and the Brooklyn Eagles, the group that sponsored the evening, is BPL’s attempt at curating long-lasting connections with local branches.

“The creation of the Brooklyn Eagles is one part of a continued effort to create a range of opportunities for Brooklynites to engage with the Library,” said Madeline Kaye a library spokesperson. Part of BPL’s increased focus on volunteerism, the Classic is what Ms. Kay described as a “friend-raiser:” raising money for the Library while also building relationships between the institution and a diverse group of young supporters. The event’s host committee included NYC Council Members Brad Lander and Carlos Menchaca, along with authors Charles Duhigg, Emma Straub, Myla Goldberg, and Dan Wilbur.

Recent fundraising efforts, such as the announcement that the Brooklyn Heights Library branch will be sold for $52 million to Hudson Companies for redevelopment, have come under intense scrutiny as the Library proposes liquidating a public asset to address urgent capital repairs. However it’s hard to criticize the idea of gathering young movers and shakers at a fundraiser that benefits BPL programming for children, youth, and families. The evening’s goal was to exceed the $50,000 raised last year and—based on last night’s turnout—that total was almost certainly exceeded.

A new literary prize was also announced last night. The Brooklyn Eagles Literary Prize is to be awarded to exemplary authors in both fiction and nonfiction. Candidates—nominated by Brooklyn’s librarians and bookstores—will be judged by a panel of BPL librarians and established authors with the prize to be awarded annually at the Brooklyn Classic starting next year.

As the Library freely admits, the idea for the Eagles was borrowed from the New York Public Library, whose Young Lions program has raised $5 million for the Manhattan institution since 1999. BPL cannot compete with NYPL’s fundraising prowess, but in contrast to the Queens Public Library—which gets all of it’s funding from public sources—the Brooklyn Classic shows that BPL has the means to tap the influx of new money flowing into New York’s most dynamic borough. Growing a community of young philanthropists is an important long-term approach to sustaining essential services the Library offers throughout its 60 branches.

“As a native of Brooklyn, the Library has played a major role in my life since childhood,” said Eagles member Shauneequa Owusu. “The books, programs and events at the library helped me learn very early on that there was a big world out there that was mine to explore.”

“Local libraries are tremendous community assets that often don’t get the attention they deserve,” continued Ms. Owusu, a health policy manager at the New York Academy of Medicine. “When I talk about why I support BPL and libraries overall, I often refer to a favorite quote from Keith Richards: ‘The public library is the great equalizer.’”

“It’s the duty of my peers and I to preserve this local treasure which affords opportunity to everyone.”

“I rediscovered the library with my daughter,” said Peter Goldwasser, the Brooklyn Eagles founder and chair. “She was always looking for something new to read or listen to, so we have explored everything and anything, from Egyptian pyramids to submarines to Spanish dance music.”

“I can’t think of another service that provides so much, for so many people, for free,” continued Mr. Goldwasser, who has worked for progressive causes includes Girl Rising, Fair Vote and Transportation Alternatives. “It’s not just every book under the sun; it’s educational classes, job training, youth programs, lectures, concerts.”

Speaking of the group he founded two years ago and has now grown to 150 members, Goldwasser said: “I think each local library branch is a real opportunity for folks to get involved with their community. My hope is that the Brooklyn Eagles will help folks meet other people who care about the library and want to learn how they can give back.”

Ms. Owusu acknowledged the powerful appeal of the Library’s mission. “At its core, BPL is committed to seeing that all who walk through its doors thrive. How could anyone not get behind that?”