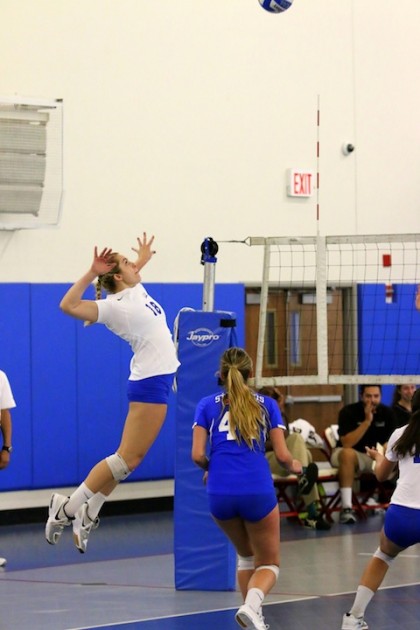 By brooklynheightsblog on September 29, 2014 4:28 pm in Brooklyn Heights, Sports

On Sunday afternoon in front of a raucous Genovesi Center crowd, the St. Francis Brooklyn women’s volleyball team faced the behemoths of Brooklyn, Long Island University. The Blackbirds have not dropped a Northeast Conference (NEC) match in more than two years and have dominated the host Terriers over the last decade.

With the Blackbirds returning to Brooklyn for the first time since toppling 25th-ranked Michigan State last week in East Lansing—the program’s first ever win over a nationally ranked opponent—the Terriers gave their guests all they could handle.

But it was LIU junior Tamara Ignjic of Belgrade who inflicted the most damage to the Terriers’ hopes, leading all players with 14 kills.

When SFC’s Maggie Niu, a 5-11 junior from San Tan Valley, Arizona, hammered a kill over the outstreched arms of Mengdi Zhao, the Blackbird’s 6-3 middle blocker from Bejing, the crowd erupted. Perhaps the upstart Terriers could hang with Brooklyn’s best volleyballers. But LIU quickly reasserted its dominance, pulling away for a 25-14 first set win.

The second set saw the home team keep things interesting, as St. Francis was within striking distance of LIU at 8-10. But the Blackbirds proceeded to take 11 of the next 15 points for a commanding 21-12 lead on their way to a 25-13 win.

Midway through the third set, with LIU holding a 14-10 lead, Gerard hit for a soaring slam that delighted the Terrier faithful. St. Francis stayed close due to a couple of kills by 6-1 freshman Brooke Haliscak of La Vernia, Texas, but LIU closed out the match with a flourish, winning 25-16 to complete the sweep.

“I knew coming into this match that they were a top-tier team,” said SFC head coach Abra Rummel, in her first taste of the schools’ Battle of Brooklyn rivalry.

“I told the girls that playing a top-level team like this is going to show us exactly what we have to work on.”

“We have a good foundation here… [w]e just need skill development,” added Rummel, in her first year coaching the Terriers. “Volleyball is a combination of athleticism and skill but we’re not quite there in terms of skill. We’ll get there because [we have] a very athletic group of girls.” 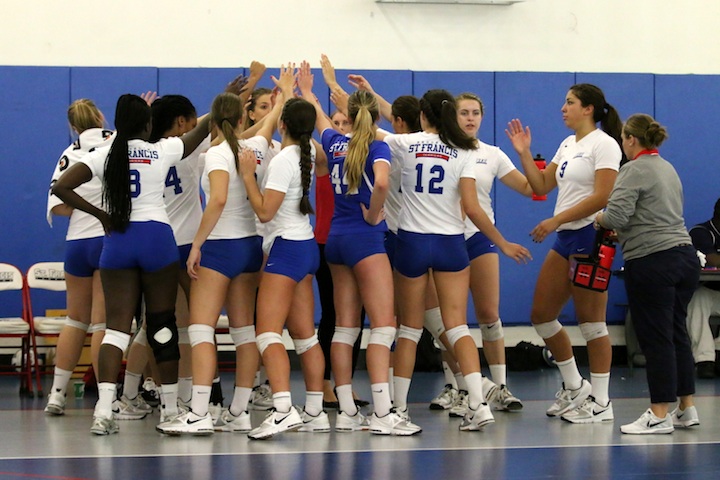 Despite the 3-0 drubbing, it’s clear that the Terriers are a different team from years past, when the Blackbirds—and many other teams—simply had to show up for an easy win. SFC went a combined 12-85 the past three seasons.

“They [St. Francis] are consistent about growing their program, which is good and bad for us,” said Robinson, in his seventh season at LIU. “It means we have to work harder but it builds volleyball in Brooklyn, and we really want that.”

Besides Niu (4 kills) and Gerard, who led SFC with 5 kills, junior Leah Zitting, a 6-0 middle blocker from Huntsville, Alabama, registered 4 kills on the day. Unlike the Blackbirds, whose starting lineup has stayed intact the past two seasons, the Terriers are a young team that will have to grow together to challenge the NEC’s best.

“Our goal is to make it to the conference championships [this year],” said Rummel. “I think we can do it; we just have to keep the upwards trajectory that we’ve had all season.”

NOTES: Sunday’s win increased LIU’s all-time dominance in this rivalry to 33-9. The teams will meet again at LIU Brooklyn on Saturday, October 25 at 1 p.m. St. Francis will host Central Connecticut State, last year’s runner up to LIU in the NEC tournament, on Saturday, October 11 at 1 p.m.