Last night Pete Davidson made his debut on Saturday Night Live. In a year when most of the cast is new, his turn on Weekend Update was the breakout performance.

And there’s a reason why all us in Brooklyn Heights should be rooting for him — his father was Scott Davidson, one of the men of Engine Company 205 / Ladder Company 118 “Fire Under the Bridge” who were killed on 9/11/01 while trying to save others.

Scott, as BHB super-commenter Nabeguy noted, was nicknamed “Dog” and known for his sense of humor as he “teased and cajoled his comrades”.

The younger Davidson was already a rising young comic and radio host (he worked with Nick Cannon on his short lived NYC morning show) before being named to the new SNL cast earlier this year. He told Jimmy Kimmel the he’d just dropped out of St. Francis College and told the Staten Island Advance, “I’m freaking out a little but I’m excited. It’s such a crazy thing you never thought would ever happen.” 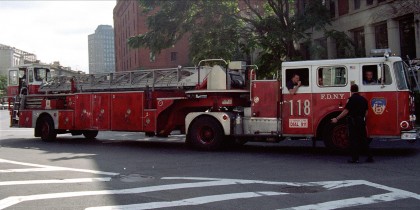 Ladder 118 on Old Fulton St. in 2000. Firefighter Scott Davidson, who died at the World Trade Center, is seen aboard the rig. Photo by M. Hermann

Landmarks Commission Says Hicks Street Townhouses Are A No-Go
Have You Lost a Parakeet?