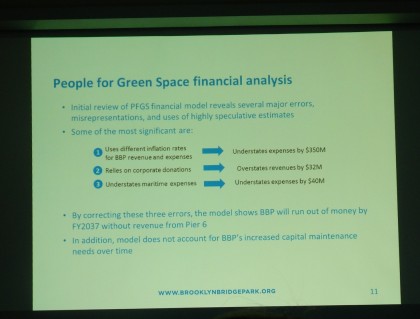 The meeting of the Operations Committee of the Brooklyn Bridge Park’s Community Advisory Council on Wednesday night at the BBP’s offices on Furman Street started off slowly but finished with a bang as David McCarty, BBP’s Real Estate Project Manager, went toe-to-statistical-toe with Henry Richmond, a financial analyst for People For Green Space (PFGS), the upstart opposition group whose efforts apparently have gotten under the skin of Brooklyn Bridge Park Corporation staff.

At the close of a seemingly mundane rehash of BBP finances to the park’s CAC–information that for the most part had been previously presented at a BBPC board meeting on August 6–an entirely new PowerPoint slide popped up on screen: a statistical analysis of a recent proposal by PFGS about how BBP is providing misleading financial information to the public. 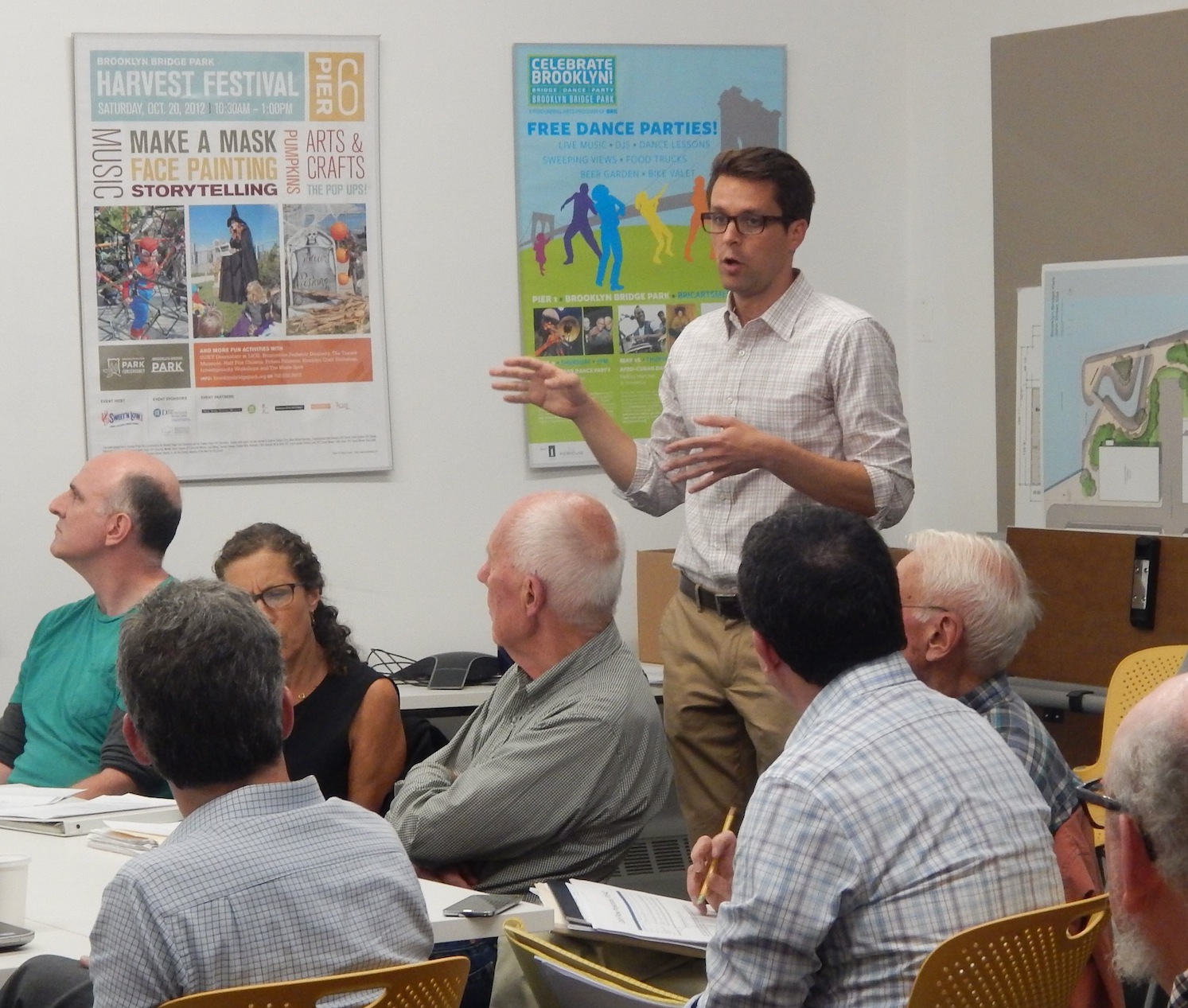 Mr. McCarty and David Lowin, BBPC Vice President for Real Estate, then proceeded to dispute PFGS’ argument, primarily by suggesting that the Brooklyn Heights-based advocacy group take a primer in basic accounting principles. Suggesting that PFGS made numerous faulty assumptions in determining that expiring tax abatements at One Brooklyn Bridge Park—among other undisclosed revenue streams—will allow BBP to forgo revenue from the controversial Pier 6 construction project, McCarty and Lowin took turns criticizing at an analysis that has drawn attention from the press and—obviously—BBPC.

Ignoring jeers from People for Green Space supporters in the audience, including Martin Hale, board chair of the small but apparently influential non-profit, McCarty explained that PFGS’ analysis used different inflation rates on BBP revenue and expenses, thereby understating BBP expenses over the next 50 years by $350M; relied too heavily on corporate donations to overstate revenue by $32M; and understated maritime expenses–principally the cost of repairing and maintaining the pilings that support the piers–by $40M.

CAC members then had their opportunity to pick at Mr. McCarty’s comments, with many questioning exactly how the numbers all add up to. One persistent concern was a recent decision by BBPC board to sock away excess cash in a capital funding “rainy day” account; the first million for that fund was contributed this fiscal year. Mr. Lowin said that the plan is as much as $6 million per year–half the park’s current operating budget–will eventually be earmarked to maintain park infrastructure, a practice he said was adopted after examining the practices of other park conservancies.

This fund is separate from approximately $210 million allocated to maintain the park’s piers, a project which underlies all BBP financial considerations.

Doug Eisenstein, a CAC member from One Brooklyn Bridge Park, the first of the park’s luxury condominium projects that sustain park operations, suggested that there is perception that park financial numbers “are being geared to fit the housing need”–that is, to demonstrate that the park will run out of money if BBP doesn’t build the two Pier 6 towers, construction which PFGS opposes.

“The problem is that current projections don’t take into account the expiring of the abatements; when $80M is not explained where it’s going,“ said Mr. Eisenstein about increased revenues when his condo’s J-51 tax abatements expire in 2024. “It’s like a gallon pitcher trying to fit into a coffee cup” was Eisenstein’s colorful characterization of how potential Pier 6 revenue will impact a projected shortfall of BBP annual expenses.

The real fireworks began when the public was finally permitted to speak. Mr. Hale and Mr. Richmond of PFGS both questioned the lack of detail concerning revenues and expenses in BBP financial projections. Descending into accountant-speak, Richmond stated that the reason he used different inflation rates for revenues and expenses was due to real estate taxes, which PFGS cites as one of the most stable sources of revenue to fund local government budgets.

McCarty said it was BBP’s considered opinion that it’s better to use the same rate of inflation. A surprising admission was that Richmond has been allowed to sit with BBP financial planners, though there’s obviously a difference in how the two analysts are modeling the complex figures that underlie the park’s financial projections.

Responding to suggestions that BBPC should wait a couple of years, until future revenues and expenses can be projected more accurately, before deciding whether to proceed with the Pier 6 housing, Regina Myer, BBPC’s President, explained that it’s important to remember that although the price of Brooklyn real estate is currently sky high, there are no assurances it will remain that way. Perhaps more important, said Ms. Myer, is while park construction is now fully funded, it is vital to secure a revenue stream for future maintenance by contributing now to capital funding reserves.

Myer, in a statement sent to BHB this morning, said: “Pier 6 will guarantee the future of the park for generations to come. We have been meeting with the community on a regular basis specifically regarding Pier 6 and our financial projections showing the need for the revenue this project will generate, and we look forward to more open, spirited discussions.”

In a statement also sent to BHB this morning, Hale, PFGS board chair, stated “The BBPC [last night] acknowledged they had not provided a fulsome or fair financial model and were caught ignoring future revenue. We stand by the analysis we have done and believe there is no financial justification to build the Pier 6 towers.”