With a resounding 10 to 3 vote against a motion by Mr. Raskin to revisit BBP’s General Project Plan [GPP] and to conduct a new Environmental Impact Statement [EIS], Raskin’s fellow board members made it abundantly clear that they are opposed to any revisions of the long-agreed upon design for the park that wraps around the Brooklyn waterfront.

With this action, the controversial plan to build two towers—with heights up to 31 and 15 stories tall located near Atlantic Avenue and Furman Street—appears intact, much to the dismay of a determined coalition of local interests united under the banner of opposition to additional BBP housing.

With a virtual who’s-who of Brooklyn Heights luminaries arguing both sides of the issue, including Judi Francis of the Brooklyn Bridge Park Defense Fund, Nancy Webster of the BBP Conservancy, Alexandra Bowie of the Brooklyn Heights Association, Alan Washington of the Downtown Brooklyn Partnership, and Lori Schomp of People for Green Space, in addition to a bevy of local politicians headlined by Senator Squadron and Council Member Levin, comments were often vocally punctuated by remarks from the snarky, anti-development crowd.

Senator Squadron, who during opening public comments affirmed his opposition to housing in any city park, stated to much applause that “Brooklyn Bridge Park has been wildly successful –beyond anyone’s expectations… That very success, however, is one reason to re-evaluate the [Pier 6] proposal. The assumptions of park use from ten years ago have frankly proven insufficiently ambitious.”

“This GPP was devised under a very different real estate market,” said Senator Squadron, who then questioned the need for additional housing to sustain the park: “What are the true financial needs for a sustainable park for generations [to come]?”

Mr. Squadron’s comments were amplified by Council Member Levin, a BBPC board member who justified undertaking a new EIS by citing pressure on P.S. 8, the area’s single public elementary school, to accommodate an anticipated surge in population as a result of Pier 6 housing and other Brooklyn Heights residential development.

Mr. Levin also raised concerns about the impact on Pier 6 housing in the event of another storm of the magnitude of Superstorm Sandy, given that BBP is located in a federally designated flood zone. 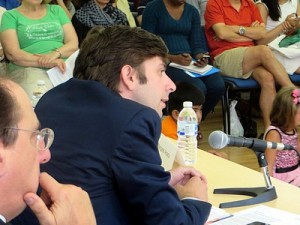 In refusing to review a plan that is almost a decade old, Raskin implied that BBPC board members were unwilling to acknowledge that “the community has changed, Brooklyn has changed; the world has changed – but our park plan hasn’t.”

Henry Gutman, a BBPC board member who stated that his experience with the BBP plan dates back decades, cleverly opened his comments opposing Mr. Raskin’s motion by addressing a group of children seated before the the board to protest of Pier 6 development plans. 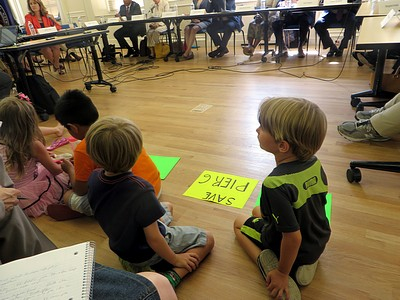 “We’re glad that you love the park,” said Mr. Gutman. “you’re the reason… that a lot of us have been working on this for a long time.”

Addressing the audience, Mr. Gutman continued: “The debate over the financial model for this park started in the 1980’s and there are lots of people with strongly held views that conflict with each other… [W]e’ve been debating this issue for at least a decade.”

Mr. Gutman went on to praise Ms. Myer and her staff for responding to the opposition’s concerns, stating that BBP will consult with “world class environmental” advisers concerning “all the issues people have referred to.”

“I think everyone on this board agrees that we should do the right thing and do it in the right way,” said Gutman, who added—to a chorus of catcalls—“the only thing that has changed… is the inclusion of affordable housing”–affirming that Pier 6 housing plans always included towers that would dwarf the surrounding park. “It [the larger Pier 6 tower] was 31 stories when approved,” he concluded. 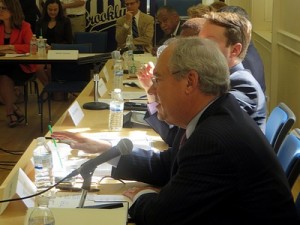 Illustrating the animosity generated by a plan—despite universal agreement about the park’s success—BBPC board member Joanne Witty, who opposed Mr. Raskin’s motion, responded sharply to comments by Ms. Francis that were critical of where BBP housing has been placed. “I live at 77 Columbia Heights; [a] hotel and Pier 1 housing is going up in front of my house,” snapped Ms. Witty.

To refute the opposition’s contention that the park’s plan is out of date and that the outsized scale of BBP’s success warranted a GPP review, BBP President Regina Myer paraded experts to support the corporation’s belief that not only is the plan not obsolete, but reviewing it at this juncture, with 72% of the park complete, would be unprecedented.

In response to demands for a new EIS, Ms. Myer proposed a Supplemental Environmental Impact Statement [SEIS]. As outlined by Susan E. Amron, the City’s chair environmental lawyer, BBP would determine if there are grounds for an environmental review, followed by a determination as to whether a SEIS—far more limited that an EIS—was warranted.

This admission by Myer and BBP management of a need for some form of environmental review puzzled Lori Schomp of the People for Green Space Foundation.

I’m obviously disappointed” by the outcome, admitted Ms. Schomp, who appeared worn down by her efforts.

“I think the community had some persuasive things to say before and after [the board’s deliberations]. I’m happy that the [BBPC] board was listening.”

UPDATE: Belinda Cape, a spokeswoman for BBP, sent BHB the following correction:
“At the Board meeting, Regina [Myer] announced that further environmental review will be conducted to find whether a Supplemental Environmental Impact Statement is warranted.”