By brooklynheightsblog on July 25, 2014 5:20 pm in Brooklyn Heights, Government

Council Member Stephen Levin: Honestly, [this is] the first I’m hearing of it. I was in Omaha this morning, and I checked the New York Times, and I didn’t hear that. It’s concerning obviously because of the security breach. You always want to make sure the Brooklyn Bridge is secure.

CM Levin: For over a year we’ve been in talks with DOT and the leadership of Concord Village about a lot of these issues from a process standpoint in terms of the timing and in terms of the scale of construction. This is a big project…. All of Tillary Street needs to be safer. It’s an incredibly dangerous, highly trafficked area, so I’m all for safety improvements…. I walk on it, I drive on it, so I think in general a lot of the proposed reconstruction and reforms there are very positive. I think the details need to be worked out…. What they’re proposing in a lot of ways is very positive. There’s a lot of streetscaping, new trees, [it’s] a lot more pedestrian-friendly…. 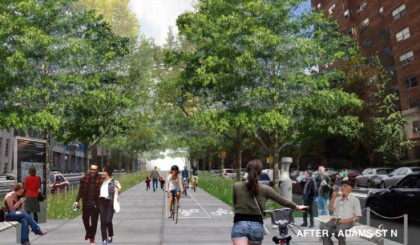 BHB: The concept that the cost of the public good often falls heavily on a specific few?

CM Levin: I think that everyone agrees that Tillary Street is an extremely dangerous intersection. I think it’s good that the city is looking to get a significant amount of federal dollars—they’re using federal resources on a problem stretch in the middle of downtown Brooklyn. What’s the right mitigation measures and the right design that is accommodating to the needs of the neighbors—Concord Village is right next door—for everybody it can be a win, win, win. But it means that everybody has a real seat at the table. I’m confident that that will be the case and I look forward to working with DOT and folks at Concord Village to make sure that happens.

CM Levin: I’ve been outspoken about housing in the park for the last five years now. I’m a member of the Brooklyn Bridge Park Corporation board, and I’ve voted against housing in the park at every opportunity…. I think the issues brought up in the lawsuit…around environmental impact are significant because…all of Brooklyn Heights is zoned for one elementary school.… [A]ctually, in this case, it’s a couple of neighborhoods because you have Brooklyn Heights and DUMBO both served by PS 8.

[T]he number one impact…what they’re [BBP board] seeking to do, is go around the city land use procedure to get approval for Pier 6, because it’s approved by the Brooklyn Bridge Corporation board, of which I’m a member, instead of through the regular land use process, which is called ULURP.

Because …the park is part of a “general project” plan, it’s a different process. General project plans are used for large-scale projects that involve base usage. Barclays Center was a general project that circumvented ULURP, but the majority of land use goes through ULURP…. And issues like “Where are you going to build a school”—those are issues that are addressed in the ULURP process.

Is There Really an Islamic Connection to the Brooklyn Bridge Flag Prank?
Last Minute Weekend Suggestions: Brooklyn Heights and Nearby