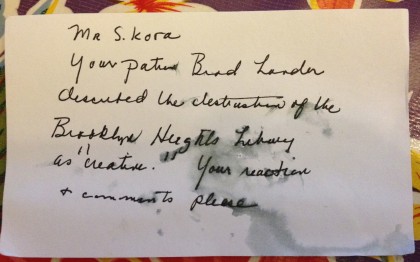 By brooklynheightsblog on September 3, 2014 7:51 am in Brooklyn Heights

The second-ever debate held by the Brooklyn Heights Blog is over and by many measures it was a great opportunity for Brooklyn Heights residents to hear from the three candidates—Doug Biviano, Peter Sikora and Jo Anne Simon—who are running to replace Joan Millman in the New York State 52nd Assembly District.

In case you missed all the action last night at St. Francis College’s Founders Hall, BHB’s own Heather Quinlan tweeted out debate highlights. We will also continue our coverage of this important local election as whoever is selected will weigh in on issues critical to the Brooklyn Heights community.

Our hope was to include as many questions as possible from the audience, but due to time constraints that was not possible. Because we are a blog that greatly values—and encourages!—our readers’ comments, below are listed all questions collected during last night’s candidates forum.

We will forward these questions to all the candidates and encourage responses. As always we’d also like to hear from our readers; any other questions, comments or thoughts about “Election or Coronation? The Brooklyn Heights Blog 52nd Assembly District Debate.”

NOTE: These questions are presented as is and do not reflect the opinions of BHB, which will not endorse a candidate for this or any election. Our reader poll will be posted later today.

General:
There is more than one audience question on the table. Is this a top-down moderated debate?

Brooklyn Bridge Park:
Should the Brooklyn Bridge Park Corporation br abolished and that area made a proper part of the city to restore checks and balances especially since when the state exited (during Paterson) everything come under exclusive mayoral control?

What is the role of the state assembly in reviewing proposals for Brooklyn Bridge Park?

How will you make Brooklyn Bridge Park more user friendly especially for seniors?

* For this question’s answer assume BBP is fully funded. What is the best future use of Pier 6 for our community.
What is your vision for Pier 6
Considerations: 10 year old EIS; Brooklyn fastest growing borough with least park space; affordable housing need; small park (60 acres?) with millions of more future visitors, need for a “Park Entrance” on Atlantic

Have any of the candidates taken money from the Offensends and, given the situation with the Libraries, is that improper?

Brad Lander has gone out of his way to say that selling and shrinking the Brooklyn Heights Library is a good idea—which of the candidates would stand up to him on this and in what way?

What is your opinion of the BPL plan in BK Hghts—what is your alternative?

LICH:
Regarding closing of LICH are you familiar with analyses of prospective hospital funding? Has there been an analysis of how losses could have been curtailed?

For Doug Biviano:
I believe in your positions and I believe you are sincere. Do you think you can achieve your goals with your somewhat abrasive style?

For Peter Sikora:
Why were you absent from the Atlantic Yards fight? Did it have something to do with your WFP / BerthaLewis relationship?

If elected will you continue to work for the Communications Workers of America as a lobbyist?

You talk about global warming, can you tell us your plan to do something about it in Albany?

I have been a union member for over 50 years so when I received a piece of literature listing your union affiliations I was surprised that you didn’t have 1 union that deals with schools, children, education, lunch ladies, school bus drivers. Why is that?

What’s with Sikora’s sexist beat up of Simon by the Squadron/Lander/Levin bunch?

Your partner Brad Lander described the destruction of the Brooklyn Heights Library as “creative.” Your reaction and comments please

For Jo Anne Simon:
Will you actively oppose Pier 6 housing if elected? You seem too cozy with the promoters in Brooklyn Heights!

Affordable Housing:
The New York Times just ran an editorial suggesting that when Mayor de Blasio breaks eggs or pushes the envelope to do more :affordable” or “workplace” housing it is NYMBYism to oppose. Do you agree?

Albany:
Where do you stand on Albany’s politically driven redistricting / gerrymandering? If you oppose it, who would you change it?

Other than the elected officials sitting in this room now, would would you consider and ethical, effective legislator in Albany now?

Atlantic Yards:
What is your position on FCR’s deal with the Chinese government controlled developers who now have 70% control of Atlantic Yards—which was urban renewal land & used eminent domain to remove families and small businesses.

Education:
How do you feel about giftedn and talented programs in the public schools?

What is your opinion of the Common Core in NYS?

Environmental Concerns:
Why were not in the forefront of getting the Gowanus Canal a superfund. I do not recall your voice—will you support EPA.

Law & Order:
We know you are all against chokeholds, but do you think we should eliminate broken windows policing?

Should cyclists who run red lights be ticketed?

Will you enforce tickets to bicycle riders who do not obey traffic rules?

Seniors:
What will you do for seniors in the neighborhood?

Small Business:
New development and higher rents are helping to force out small businesses. What ideas do you have to change this trend?