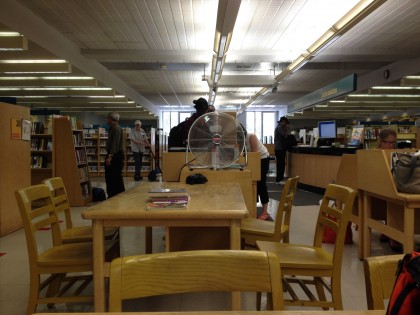 With the days shortening and the buzz of a new school year underscoring that summer’s end is near, BHB checked in on the Brooklyn Heights Library branch, whose hours the past three summers have been drastically curtailed due to a defunct air condition system.

On a recent balmy August weekday, the branch appears as active as ever. All the computer workstations are full, and the Business & Career Library appears to be well subscribed with an assortment of researchers taking in various periodicals and nap-takers.

“The summer so far has been very kind to us and the city as a whole,” reported Uldis Skrodelis, the Brooklyn Heights Branch’s Neighborhood Library Supervisor. “There has only been one day when the temperature was 91 degrees. This of course has been a great help in having reasonable conditions in the building.”

Library patron have to endure buzzing electric fans that populate every corner of the 50 year old building. They are a desperate attempt to cool an aging, poorly maintained facility whose obsolete HVAC system was never adequately maintained and is now deemed too expensive to repair.

Grady Ashley, who uses the library’s computers three times a week, has adjusted to the summer heat as well as the branch’s daily 8 a.m. to 1 p.m. schedule. “The hours are the only thing that I’m upset with. I have to come earlier, but besides that, I’m used to not having AC anyway.”

In spite of the new schedule, Mr. Ashley’s opinion hasn’t changed about one of the Brooklyn Public Library’s busiest branches. “I really like the library. It’s very convenient for me because I live a couple of blocks away. It’s never really crowded so there’s always access.”

Ann Kaiser, another regular library user, said that the lack of air conditioning has made the library “a little less pleasant. I’ve been out of town for more than a month so I was disappointed when I saw the hours.”

Admitting that “It’s hard to concentrate when you’re hot!” Ms. Kaiser added that “I need a quiet space and there’s so much construction [that] the cafés are not quiet. I was disappointed by the limited hours but I made sure that I dressed coolly.”

Ms. Kaiser expressed surprise when informed that the branch’s future was uncertain due to a proposed redevelopment of the site as a high-rise development.

“I had no idea [plans for the Brooklyn Heights library project] included a high rise. This action puts a public institution at risk.”

Nanda Moore, a summer intern at branch, was decidedly upbeat about her first experience with the Brooklyn Heights branch. “I just started working here for the summer and it’s amazing! Everybody’s friendly, the workspace is clean and nice.”

Not all patrons were so placid in their assessment of the branches changed hours. At 12:45 p.m. a BPL security officer began turning away patrons who attempted to enter, some of whom were taken aback by the unexpected schedule change.

“I personally have not experienced any conversations with the public about their dissatisfaction with our temporary summer schedule,” said Mr. Skrodelis, who then admitted “I’m sure [patrons] are looking forward to eventually having full hours.” The branch will resume its normal schedule (10 a.m. to 6 p.m. Monday and Friday and 10 a.m. to 8 p.m. Tuesday, Wednesday and Thursday) beginning October 1.

When asked about his experience with the branch’s summer hours, Ken Wasserman, toting a massive novel he had just borrowed, said: “It’s still workable but I don’t know why they can’t fix the AC.”

“I understand there’s development plans in the works because they won’t fix the air conditioning,” continued Mr. Wasserman. “That I oppose but it’s a nice local library that I really like.”

Mr. Skrodelis, the branch’s supervisor, said that “My conversations with our public have been ongoing, and, for the most part, concern [has centered on] the entire timetable of future developments and the location of a temporary library that would serve the community during the span of the proposed project.”

“Everyone—almost to a person—has said that libraries in general need more funding than they now receive from the City.”

Ms. Kaiser agrees that libraries are essential to the fabric of her Brooklyn Heights neighborhood.

“In Catalonia, at the turn of the 20th-century, the slogan was: ‘A library, a school and a telephone center within walking distance of every neighborhood.’ I’m a big believer in that.”

After Being Dissed by Errol Louis, Biviano Wins First Fight; Forces Invite to NY 1 52nd AD Debate
NY1 Hosts 52nd AD Debate or “I Will Shut Your Mic Off”