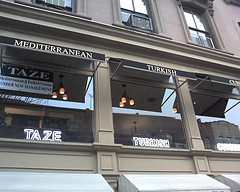 I may not have the refined tastes of Mrs. Fink, but I know a good or bad meal when I eat it. Craving something outside the usual burgers and fries standard I've been having lately, I and a companion decided to pop up into Taze on Montague between Henry and Clinton. I never had a chance to dine here when it was "Kapadokya", so I cannot make a comparison, but the food at "Taze" was tasty enough, and at reasonable prices, with dinner entrees averaging around $12-14. The staff was very green; They were friendly but quite nervous it seemed. There were a fair amount of people dining there last night, so it wasn't one of those uncomfortable "where is everyone?" kind of atmospheres.

I started off with the babagunus, which had a stronger eggplant flavor than what I'm used to, but it went well with the warm, fresh bread they served. For those who loved the Mixed Grill ($18) at the previous incarnation, it's still on the menu. Myself, I decided to order the Manti ($12.50), a traditional Turkish/Central Asian dish of beef dumplings in a spicy yogurt and dill sauce. The sauce was delicious with a fairly strong dill component (something I'm not usually a fan of, but it worked very well here). The beef dumplings were smaller than what I was expecting. Imagine lots of little dough balls instead of the large bulging shapes you usually think of when you hear "dumplings". It was good, but I fear there wasn't enough beef in them. My companion had the spinach in yogurt sauce ($12.50), which had a similar sauce as the Manti, sans the dill. The spinach could've been cooked a little less, as it reminded me too much of the canned variety, but it was pretty good all the same. If you order the saucier dishes, make sure you get more fresh bread to sop it all up.

We had a dessert, naturally it was baklava. Having had every version of baklava from Greek to Ethiopian, I actually detest it at this point, but thought it would make a good test. This version was a strange one for me, as there weren't a lot of nuts, and it had a strong cheese taste, which I don't recall ever encountering before in baklava. At $7, though, I don't know if it was really worth it.

All in all,  I was satisfied, though there is room for improvement (make it spicier!). I am fully aware of the difficulties of starting up a restaurant — who hasn't read Kitchen Confidential or watched Big Night? — so my expectations weren't that high for a place barely in existence for a week. If you decide to try it out, be aware as of last night they still didn't have their credit card processing machinery configured and running (overheard two of them discussing how to set it up properly), and the sign said it would be a few days before it was ready. So bring enough cash! I recommend checking it out.

Anyone else eat here yet? Care to share your review?