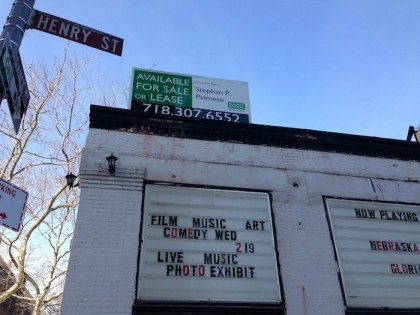 A spokesperson for Massey Knakal tells BHB that 70 Henry Street, currently the home of the Brooklyn Heights Cinema, is in contract to be sold.

The theater will go dark on Thursday, August 27 after 44 years of operation.

Kenn Lowy, who has run the Cinema since 2011, has plans to open at a new location in DUMBO in the near future. Tonight, Mr. Lowy will post the following notice for loyal fans of one of the few remaining indepenent movie theaters left in New York City.

Sadly, we will be closing this location on August 27th. After 44 years on Henry Street, we will have to move to a new location, a smaller space in nearby DUMBO.

The reason for our move is twofold. The number one reason is that nowadays there are not enough movie goers in Brooklyn Heights to sustain a two screen cinema. The other reason is that the building that the Brooklyn Heights Cinema has called home for over 40 years, is being sold. While economics would have forced this move anyway, it is happening now because of an impending sale.

When we began looking for a new location here in the Heights, it become clear that no suitable space was available. So we started looking in DUMBO. We are currently working to finalize an excellent location we’ve found and expect to reopen in DUMBO in late September or early October.

I know this is a huge blow to our loyal neighborhood customers and I hope you’ll visit us at our new location in DUMBO, a short walk away.

Your support earlier this year enabled us to purchase a new digital projector. Without that projector, moving forward would have been impossible. We are NOT going out business. We are simply relocating and nothing would please us more than if you continue to support us and attend the wonderful independent films we will continue to show, often films that you can’t see anywhere else in Brooklyn.

We cannot thank you enough for all our support over the years.
Kenn Lowy and the staff of the Brooklyn Heights Cinema.

Among the choices available to Lowy in DUMBO is the shuttered ReBar theater which closed after the Jason Stevens scandal.

Update: Despite reports printed (and reblogged) elsewhere, Lowy tells us that a deal to move the BHC into the ReBar space is “not even close” as of yet. He adds that “there’s a lot more negotiating to do.”

Left unanswered was the question of a residential addition to the cinema which is under review by the Landmarks Preservation Commission. When reached for comment about the impending sale, 70 Henry Street owner Thomas Caruana declined comment.