An event held by an LGBT organization in Cadman Plaza Park on Saturday has at least one Brooklyn Heights resident angry over its loud music. McBrooklyn writes that an event billed as the GLBT Summer Affair was not only sparsely attended but that, “For the first 3 hours of the noise, the only ones in the park were the crew members that set up the sound system.”

Scheduled to appear at the event – DJ Frankie Paradise creator of this nifty house mix:


Despite the apparent quality of at least these two DJs, passersby weren’t amused McBrooklyn says. 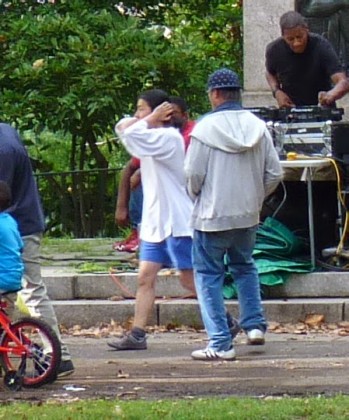 McBrooklyn: People trying to walk through the park to get home are holding their hands over their ears because the music is so painfully loud.

Residents living along Cadman Plaza have called police, but what are the odds they will show up?

The same group played the same really bad, really loud music last year, including a three-hour rendition of “I Will Not Dance to Your War Drum” interspersed with Latinized Elton John tune.

So who is responsible for this “racket?” A little background on the organization from GLBT Summer Affair’s website:

Provides Cultural Urban Special Events Fundraising that will benefit charitable organizations. Our focus on combining cultural affirmation, active engagement of classes, sexuality, gender, philosophical differences on sexuality, physical, and community health at all Health Fair events. We will provide HIV/AIDS Testing and Educational Prevention, STD screenings and blood pressure services. Working within Urban Performing Arts (local, national groups, and The Gay, Lesbian, Bisexual, Transgender Community in the greater New York City Area. Using our resources in an effort to promote recognition of the talents and contributions of empowerment of people in the community as well as promoting tourism to the greater New York City Area. Also, Hosting a vast array of events, and forums.

Did you happen to see this event? Was it too loud? Comment away!