Do You Live in the Fort Stirling Neighborhood? Do You Want To?

By Claude Scales on July 31, 2014 10:41 am in Brooklyn Heights, Brooklyn History, Neighborhoods, Streets

BHB reader Ion Freeman has Willowtown envy: he wants to live in a part of Brooklyn Heights that has a name, other than “Brooklyn Heights” or even “the North Heights.” We’re not sure exactly where he lives; it’s “in some unnamed region of the [N]orth [H]eights between the fruit streets and Montague.” The name he proposes is “Fort Stirling Neighborhood.”

If you’ve ever entered or exited the promenade at Clark Street, or walked along Columbia Heights where Clark Street ends, you’ve passed the site of Fort Stirling (see photo above). It’s now marked by a sign that says “Fort Stirling Sitting Area,” but the only opportunities for sitting when I visited the site yesterday were if one were to borrow the seat of one of the bikes parked there. 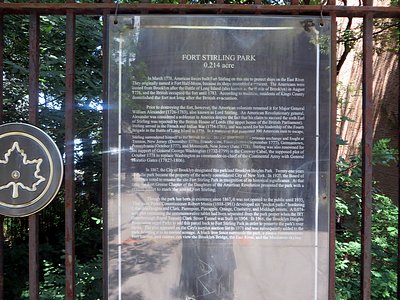 There was, back in the eighteenth century, a fort there. The sign pictured above, which has been in place for some years, tells its history, which you can read about here.

Supposing there were a Fort Stirling Neighborhood, what should be its boundaries? Extending it as far south as Montague seems a stretch, as does, as Mr. Freeman suggests, having it go eastward to Cadman Plaza. I would put its southern boundary at the north side of Pierrepont Place, and its eastern at the western side of Henry. “The fruit streets,” as Mr. Freeman acknowledges, seems to be a neighborhood sub-designation of its own. Since Pineapple Street is the next street north of Fort Stirling, I would have the Fort Stirling Neighborhood include Columbia Heights, Willow, Hicks, and the west side of Henry as far north as Pineapple, but would not include the south side of Pineapple. How’s that?

I live on Montague, and since I moved here in 1983 have always been happy to say I live in Brooklyn Heights, without any further designation. Nevertheless, Mr. Freeman got me to thinking. Perhaps we could take the area bounded by the Promenade on the west, Remsen Street on the south, Hicks Street on the east, and Pierrepont Street on the north (well, just the south side of Pierrepont, since we’ve already put the north side in the Fort Stirling Neighborhood) and call it “Seth Low Village,” in honor of the former Mayor of Brooklyn, President of Columbia University, diplomat, and Mayor of New York City, who grew up in 3 Pierrepont Place, which I can see from where I’m now sitting.