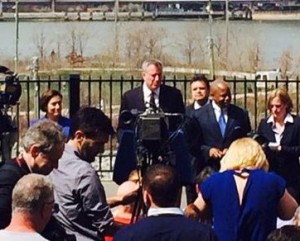 Mayor de Blasio today confirmed rumors that the Macy’s 4th of July Fireworks will be returning to the East River after four years on the west side of Manhattan. “I’m a believer that when people speak they can move mountains,” Mayor de Blasio announced. “So I’m thrilled to say the fireworks will be back on the East River.” The Mayor also said that the fireworks will be launched from the Brooklyn Bridge as well as the barges. He then went on to thank State Senator Daniel Squadron, Councilman Stephen Levin, and former Beep Marty Markowitz for their efforts in bringing the fireworks back east. Stay tuned for Karl Junkersfeld’s video, and be sure to stake out your spot on the Promenade ASAP.