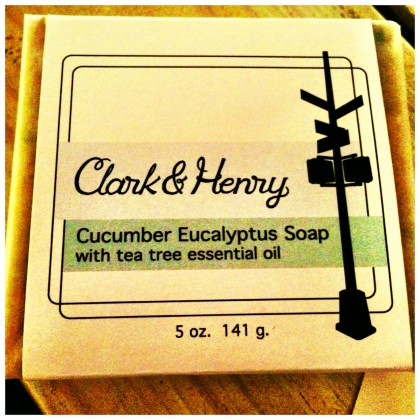 Cleaning Up in Brooklyn Heights

Just in time for the holidays, the bustling Brooklyn Heights intersection of Clark and Henry is about to smell a whole lot better, thanks to local soap makers Ross Caudill and his fiancé Joanna Maltese. Named after the famed intersection, Clark & Henry recently opened as an online shop with aspirations of retail success selling soap and household objects in Brooklyn Heights.

Their work is collaborative and the soap is a product of love. Both have a background in and passion for creation, Joanna is knowledgable in design and Ross is a multi-discipline artist. Yet at the onset of their soap-making project, neither really understood soap as a product. After months of research, reading, seminars, and experiments, they have honed the process of soap creation and are now packaging soap by hand in their Henry Street apartment.

A solution of sodium hydroxide is prepared separately. At the precise point when this is the same temperature as the oils they must be quickly mixed together to begin the chemical reaction which creates soap. After much blending, the exfoliants and essential oils are added. Finally the batch is cast into the molds. All of the components in the recipe are purposeful and curated for the attributes they bring to the final product. The fragrance is derived from the essential oils. The scrubbiness from the natural exfoliants has to be just right. The soap’s lather must be bubbly and creamy and cleansing, but also leave the skin feeling conditioned.

Joanna peels and prepares local cucumbers as Ross carefully tweaks the chemistry. Together they grind the exfoliant and prepare the casts. The result is a product and a business that avoids the potential pitfalls of artisnal pretense, yet remains charming and sincerely local.

Clark & Henry as an enterprise was in no small part inspired by the couple’s fondness of the neighborhood. Joanna smiles as she recalls returning to Brooklyn Heights after a brief stint in Park Slope, and how the couple’s product is created by hand with a ‘neighbors first’ attitude. “We wanted to make something to make our neighbors smile,” she told me over coffee at Vineapple.

Already considering creating a line of chairs, if the soap is successful the two would like to expand their product offering to include useful household items.

“We always feel a sense of accomplishment when we finish casting a batch of soap,” said Ross, explaining why they chose to start a business in Brooklyn Heights. Regardless of the success of Clark & Henry as a business, Ross and Joanna will continue to craft creative products in Brooklyn Heights for years to come.