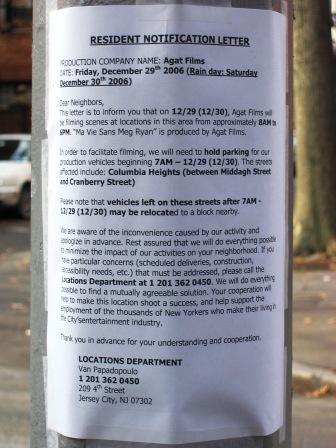 Paris, France based Agat Films will be shooting in the nabe according to a sign posted on Cranberry Street today. The movie, Ma Vie Sans Meg Ryan, will be in production on Columbia Heights, Cranberry and Middagh Streets on Friday and Saturday. The production company is informing neighbors that it will be "holding parking" for various vehicles beginning at 7am on Friday and that any cars left on the street after that time may be "relocated" to "block nearby."

The company says it is aware of the "inconvenience caused" by the production and asks that anyone with concerns or special needs call their locations department at (201) 362 – 0459.

The film is directed by Marc Gibaja, who is also a co-writer.

Every School Wants to be P.S. 8
Judges Pledge to Keep Parking Promise