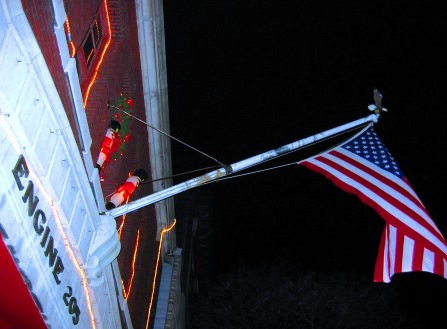 Our pals at FDNY Engine Company 205 Ladder Company 118, "Fire Under the Bridge" on Middagh Street are part of an article in today's New York Times about holiday decorations at local firehouses.

New York Times: Between Blazes Firefighters Don Decorating Hats: Take Engine Company 205 Ladder Company 118 in Brooklyn Heights on a quiet block of Middagh Street. Once a year, two wooden soldiers are mounted on either side of the upstairs window, lights frame the big garage door, and eight red ribbons on a wreath — mounted on the house — memorialize the eight firefighters from the house who died at the World Trade Center site on Sept. 11, 2001.

“I was busting guys’ chops to get it done,” said Firefighter Gerard Bellettiere, 38, who is the de facto decoration boss at the firehouse. “We bought new sets of rope lights so it would seem a little brighter.”

Inside, firefighters had strung lights across the ceiling by walking atop the fire trucks. The tree has no tinsel, just lights and some ornaments. “Keep it simple,” said Firefighter Edward Schafer, 43. “In case it gets knocked over.”

Outside, off to the side of the building, what’s that at the end of the alley? Is that … Santa? In a dark alley? Firefighter Bellettiere and his colleagues used to keep an inflated, human-size Homer Simpson-dressed-as-Santa doll squarely in front of the firehouse, thinking their neighbors in tony Brooklyn Heights would love it.

After complaints from residents, the inflatable Homer/Santa was moved inside, on top of a fuel pump, but he kept falling over. “We put him in the alley,” Firefighter Bellettiere said, looking down the forlorn and darkened walkway. “No other way to do it.”