LICH Moving Patients Out – “Don’t get sick in this part of Brooklyn”: #SaveLICH 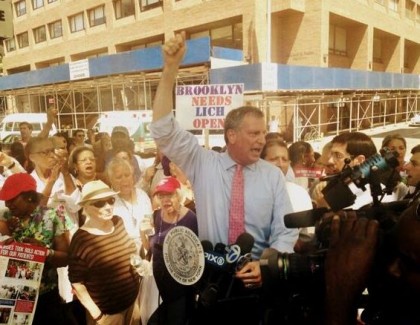 The latest LICH news—that patients will start to be moved today, with the plan of moving them all by this weekend—was met with chants of “Shame on Cuomo!” “Shame on SUNY!” and “Save our hospital!” A nurse I spoke with (who asked not to be named) said, “There are four ambulances sitting here that can’t do anything. Meanwhile Christine Quinn couldn’t get an ambulance the other day because they were all lined up with patients … [Councilmember] Tish James was called to Brooklyn Hospital because fights broke out … People say ‘You should have no problem because you have hospitals nearby,’ but there is overcrowding in the ERs and no room for ambulances. When Brooklyn Hospital can’t take you, what happens? All I can say is don’t get sick in this part of Brooklyn.”

She continued with, “It’s painful that people are listening to Cuomo and saying it’s a dump—it doesn’t matter about the frills. Come in and see what we do.” We’ll report more as we hear. Public Advocate Bill de Blasio and Councilmember Stephen Levin are on the scene, though so far no sign of Governor Cuomo or Mayor Bloomberg.