Citizens Defending Libraries, the Brooklyn Heights-based organization that is petitioning the city to stop selling public library real estate to private developers, has a full slate of rallies in the coming week. Neighbors forming the group have collected 8893 virtual petition signatures, demanding that the Cadman Plaza Library and its building, in place since 1962, should should not be demolished or sold.

CDL will sponsor “Library Protection Week” Saturday April 13 through Saturday the 20th, culminating in a press conference on the steps of Manhattan’s City Hall, where Comptroller John Liu and other elected officials are scheduled to speak. 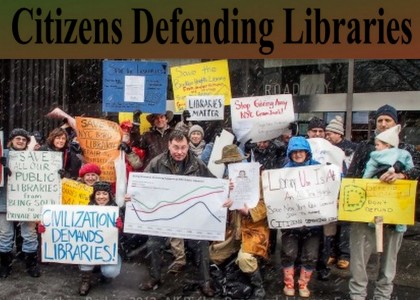 Monday, April 15: From noon to 1 p.m, a Sit Out and rally in front of the 42nd Street Central Reference Library and Mid-Manhattan Branch.

Wednesday, April 17: From noon to 1 p.m., a rally for Donnell Library, 20 West 53rd Street between 5th & 6th Avenues, (meet on 40 West 53rd). This served as home of Winnie The Pooh, rare music CDs and documentaries, and is now closed and has been scheduled to be sold to a developer since 2008, with no promised replacement.

Thursday, April 18: From noon to 1 p.m., on the steps of City Hall, City Hall Park, Broadway & Chambers Streets in Manhattan, City Comptroller John Liu will discuss the administration’s funding cuts and sell-off of the public library system at a press conference.