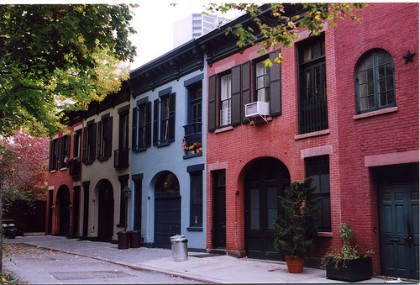 College Place Named One of 5 Best Blocks in Brooklyn

Described as “this side street off that side street,” The L Magazine named College Place one of the five best blocks to live on in Brooklyn.

The “ridiculously European” block does have a row of lovely homes–one of which (the studio apartment in blue) I almost lived in, but I couldn’t quite afford it. (I’d also heard rumors that MGMT rented one of the carriage houses as a rehearsal space? Any truth to that?) It’s also home to Love Lane Mews, the parking garage turned condo which I definitely can’t afford.

I have found it ironic that Love Lane, with such a beautiful name, is such a pockmarked street–one that looks like it should have a smokestack and Travis Bickle. But College Place does have a lot of charm. The only downside is it also has the back of CVS. But the secluded setting and beautiful homes lets you forgive a little.

Last Minute Weekend Suggestions
Brooklyn Heights Preservationist to Squadron: BPL Is Prepared To Sellout For A Mess Of Pottage