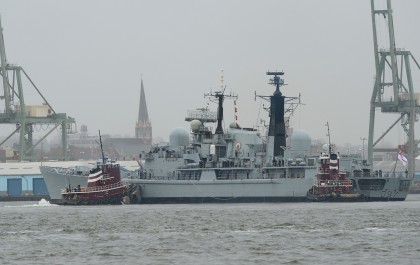 The Royal Navy destroyer HMS Edinburgh arrived in Brooklyn a short time ago, putting in at Pier 7. Her arrival is scheduled to be marked tonight between 7:30 and 8:00 p.m. with the firing of three salvoes.

She was recently in the Caribbean and is making several stops in the U.S. before returning across the pond to Portsmouth Naval Base. Commissioned in 1983, she deployed to Iraq in 2003 and has been engaged in anti-narcotic operations in the South Atlantic. With the retirement of the HMS York, she is the last Type 42 destroyer in the Royal Navy, and also has the distinction of having fired the last Sea Dart missile this past April, which had been in use since 1973.

The latest of many international vessels that have come to Pier 7, Edinburgh stays with us until Sunday, March 17th.