Developers overseeing the planned hotel and residential complex near Brooklyn Bridge Park’s Pier 1 close to Old Fulton Street want to raise both buildings by at least 3 feet to avoid potential flood damage from a future Hurricane Sandy, which devastated much of the surrounding DUMBO neighborhood.

The development, which comprises a mixed use 159-apartment building and 200-room hotel, was supposed to break ground in February, but is now on hold until developers Toll Brothers and Starwood complete a redesign.

According to The New York Post, David Von Spreckelsen, a senior VP at developer Toll Brothers, says the 159-apartment, 200-room hotel project—which would raise a $3.3 million chunk of the park’s $16 million annual maintenance budget—will now include additional steps and ramps leading to the main lobby and more masonry to ensure the building is above the site’s flood plain set by the feds.

Mechanical systems normally in basements would be moved to the roof, while the basement will be used primarily for parking. Von Spreckelsen says, “We want to make our building a structure that can survive any kind of storm.” 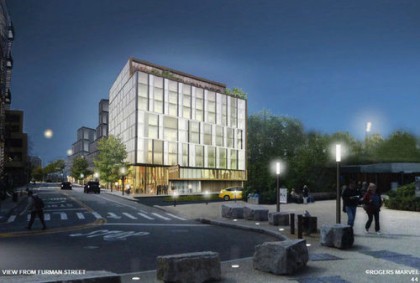